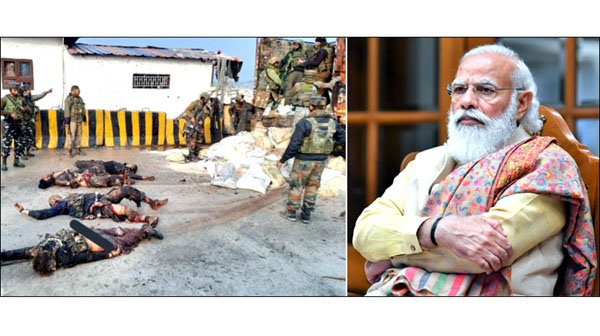 The officials revealed that the terrorists, who were neutralised by the security forces, were planning a major attack on the anniversary of the 26/11 Mumbai terror attack and also to disrupt the election process for the eight-phase polling to constitute 20 District Development Councils in Jammu and Kashmir, beginning from November 28.

On early hours on Thursday, the encounter broke out between four terrorists and security forces near Ban Toll Plaza in Nagrota area of Jammu district, in which all ultras were eliminated.

Congratulating the security forces, the Prime Minister tweeted 'Neutralising of 4 terrorists belonging to Pakistan-based terrorist organisation Jaish-e-Mohammed and the presence of large cache of weapons and explosives with them indicates that their efforts to wreak major havoc and destruction have once again been thwarted'.

'Our security forces have once again displayed utmost bravery and professionalism. Thanks to their alertness, they have defeated a nefarious plot to target grassroots level democratic exercises in Jammu and Kashmir,' he said in another tweet.

'The seizures have indicated that they were planning a big attack. This kind of seizure is unprecedented. Their target could also be the DDC election in Jammu and Kashmir; police have not ruled out the possibility. However, we are investigating,' Jammu Zone IG Mukesh Singh said.