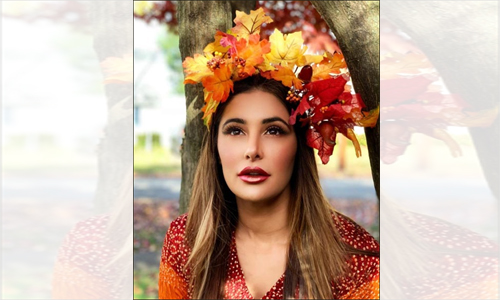 The actress Nargis Fakhri is a major fashion inspiration, her fans simply cannot get enough of her jaw-dropping natural beauty and sense of style. The actress also has a huge fan following on social media, she recently shared pictures of herself looking mesmerizing in an orange dress complimenting the various shades pf autumn-stricken trees that crown her in the pictures.

Nargis illuminated her face with dramatic eyes with golden tinge and deep red voluptuous lips glossed and tinted. She captioned the picture, `Autumn is at the end and I can feel winter creeping in. Thanksgiving is almost here and so the Christmas decorations are in stores now I tend to get a little sad at the end of the year as the seasons change and holidays come. But this year I'm super thankful to be alive and healthy. As long as I'm healthy there's another day to keep going, keep pushing , keep learning, keep experiencing life. And that's awesome. So yay for that.`

Nargis Fakhri will next be expected to be seen in the upcoming action-thriller film Torbaaz, directed by Girish Malik. The movie will also have Sanjay Dutt playing the role of an army officer in the main lead along with Rahul Dev, Rahul Mittra, and Pransh Chopra. The movie is produced by Raju Chadha, Rahul Mittra, Puneet Singh, and Girish Malik and will be releasing on Netflix.