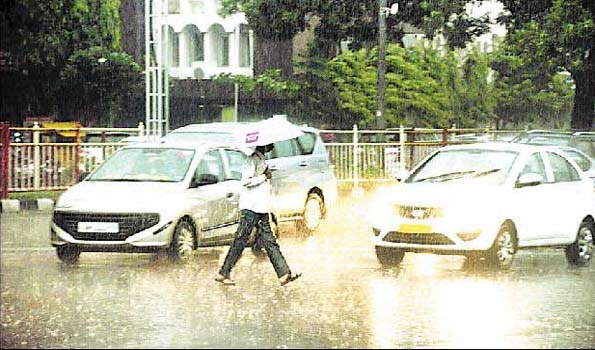 Bhopal: Monsoon is active in Madhya Pradesh for three days. It is raining in many districts. It has been raining intermittently since Wednesday night in Bhopal and Indore. Five cm of rainfall has been recorded in Bhopal, Indore, Ratlam and Jabalpur. In Mandla-Dindori, Narmada came in spate due to torrential downpour. Temples and ghats have been submerged. Kshipra river has again come into spate in Ujjain. The temples of Ramghat have been submerged. The Meteorological Department has predicted heavy rains in many districts of Madhya Pradesh in the next 24 hours.
Monsoon has once again covered the entire state. Due to this rainfall has occurred everywhere from Gwalior-Chambal to Malwa-Nimar. The water level of dams and ponds is also increasing. The Meteorological Department has said that there will be heavy rain in the state for the next 2-3 days. Another system is being formed from 17 September. Once it becomes active, the rainy season is expected to continue for a week. This system will be active across the state. This will be the third system of this month.

Heavy showers inundate roads, low-lying localities in Bhopal
Heavy showers have thrown life out of gear and inundated roads and low-lying localities in Bhopal. The heavy rain started in Bhopal from Wednesday evening itself. It rained with thunder and lightning till late night. Heavy rain was recorded again from 6 am on Thursday, which continued for about 3 hours. Even after this the intermittent showers continued. It is raining in Guna for the whole night. It has been raining intermittently since Thursday morning.

Kshipra in spate again in Ujjain
The temple of Ramghat built on the Shipra river in Ujjain was submerged due to the rains for the last 15 hours. The police have put a guard here. The entry of devotees has been banned at Ramghat. At the same time, due to the water coming on the small bridge, the traffic going towards Badnagar from this route has been stopped.

Gates of Tawa Dam in Hoshangabad closed at night: It has been raining in Hoshangabad since the last two days. Along with the city, the rural areas have also been drenched. It is also raining in Pachmarhi, Pipariya, Sohagpur, Itarsi, Seoni Malwa, Bankhedi, Babai. Four cm of rain was recorded in Hoshangabad. The gates of Tawa Dam were closed late at night.
It has been drizzling in Jabalpur since night. About 2.5 cm of rain was recorded, while Sehore, Guna, Hoshangabad, Shajapur districts have also received showers. Shajapur recorded 20 mm of rain in the last 24 hours. 21.3 feet of water has accumulated in the Chilar Dam here. Only one and a half feet of water is needed to reach the full tank level.

Narmada water level increased in Dindori
Rivers and drains are in spate in Dindori district due to the torrential rains that have continued for the last two days. The water level of Narmada river has also increased. The temples and ghats built on the Narmada bank of the district headquarters have been submerged. Narmada river is flowing above the danger mark. The Narmada river bridge built at Jogitikaria on Jabalpur Road is on the verge of drowning.
About 30 villages of Gopalpur area have lost contact with the district headquarters. While crossing the flooded bridge in Kharmer river, a pick-up vehicle was washed away in the river. The driver saved his life by swimming. A gate of the district's big dam Bilgarha has been opened.
Heavy rain was recorded in 25 districts of Madhya Pradesh within 24 hours. It rained the most in Mandla. Here 110 mm of rain has been recorded in 24 hours. Similarly, in Bhopal, Ratlam, Sidhi, Umaria and Jabalpur the figure remained above 5 cm.