Neighbour's statement on Pulwama exposed those who questioned attack: Modi 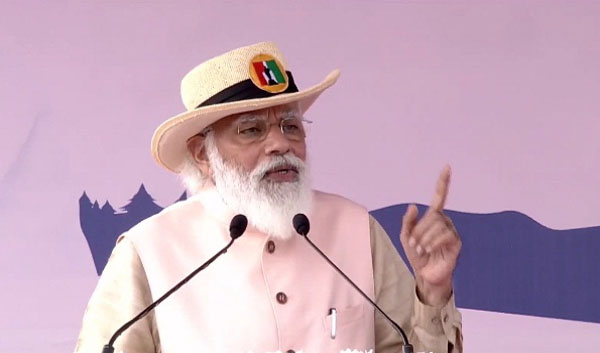 New Delhi, Oct 31(UNI) Prime Minister Narendra Modi on Saturday lashed out at the Opposition who have questioned the Pulwama terror attack, saying that reports coming from the neighbouring country have exposed the real face of these parties.

Addressing the "Ekta Diwas" celebrations to commemorate the birth anniversary of Sardar Vallabhbhai Patel at Kevadia in Gujarat, Mr Modi said,"the recent statements made in Parliament of the neighbouring country [Pakistan] has exposed the real face of some parties who indulged in ugly politics after the Pulwama attack."

"Knowingly or unknowingly, by playing into the hands of anti-national forces for your selfishness, you will neither be able to work for the interest of the country nor for your party. The highest interest for all of us should be the country's interest. When we think of everyone's interests, only then will we progress,' he said.

The Prime Minister said amidst these efforts, there are many challenges which India and the whole world are facing today. He said the way some people have come out in support of terrorism is a matter of global concern today.

"There is a great need for all countries, governments and religions to unite against terrorism. A sense of peace, brotherhood and mutual respect is the true identity of humanity. No one can ever get welfare from terrorism and-violence,' Mr Modi said.

The Prime Minister said India's perspective and attitudes towards borders have also changed.He said today those eyeing the land of India are getting a befitting reply.

“India is now moving towards becoming self reliant in the area of defence. No one can step foot here or cast an eye on our country. The brave soldiers have the power in their hands to give a befitting reply to any intruders for the protection of pride and sovereignty. We are equipped. We are building roads and tunnels in the borders despite challenges,” he said.

Terming "unity in diversity" as India’s identity, the PM said, 'Many forces dislike our unity and want to turn our diversity into our weaknesses. We must identify these force.'

Talking about Jammu and Kashmir, Mr Modi said the Valley has moved on a new path of development, leaving behind the obstacles that were coming in the development.He said the construction of Ram Temple in Ayodhya following the Supreme Court’s verdict is an attempt to restore the cultural glory of India envisioned by Sardar Patel.

The Prime Minister praised the confidence of the tribal youth and girls who have joined as volunteers at the various tourist projects in the periphery of the statue of Unity, which were inaugurated by Mr Modi on Friday. He said that Kevadia will soon find a spot in the world tourist map and provide employment opportunities to the locals.

On the occasion, the PM offered floral tributes at the "Statue of Unity", administered the "Ekta pledge" and witnessed the "Ekta Diwas" parade.

The parade also included a Rifle drill by the female officers of CRPF. The Jaguars of the Indian Air Force also performed a fly-past to mark the occasion.

The Prime Minister also saw a cultural event showcasing the tribal heritage of India on the occasion of Rashtriya Ekta diwas.