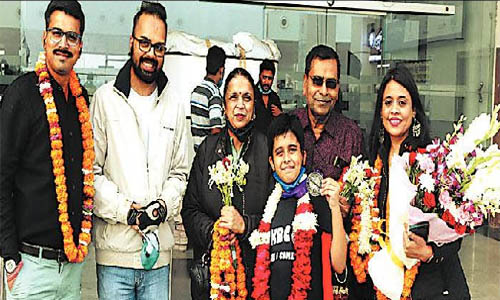 When I met Amitabh, I did not feel that I was in front of a big celebrity, had a lot of fun
Chronicle Reporter, Bhopal
To encourage children on the occasion of Children's Day in Sony Television's program Kaun Banega Crorepati, Nevedya Agarwal, a student of class IV of the capital, sat on the hot seat in the KBC Student Week episode on Wednesday.
Mother Rajni Agarwal, father Gunjan Agarwal, grandmother Anita and grandfather Dr. GK Agarwal, senior pediatrician were present with him. Nevedya, a Class IV student, is the first child from capital to reach the hot seat at the age of just 9. -Excerpts from Navbharat/ Chronicle Correspondent Sushil Mishra's telephonic discussion with Naivedya Agarwal:
Question: How was it like reaching Kaun Banega Crorepati?
Naivedya: Feel good, amazing. When I went there, I did not feel that I was sitting in front of any big celebrity. Amitabh Bachchan had a lot of fun with me. He also appreciated me and my family.
Question: How did you prepare for KBC?
Naivedya: Mama encouraged me and brought a book of General Knowledge from the market. Read by searching GK from Google and prepared with Byju's App also.
Question: What would you like to be?
Naivedya: I would like to serve the society by becoming an IAS officer.
Question: How many questions did you face on the first day?
Naivedya: I faced five questions on the first day and won 10 thousand rupees.
Question: What was the special and memorable thing about the moment spent with Amitabh?
Naivedya: I really liked this thing Amitabh called me as Nonu.
Question: What do your parents do?
Naivedya: My mother Rajni Agarwal is an engineer and father Gunjan Agarwal is a businessman.
Question: Who encouraged you to do KBC?
Naivedya: My parents and Grandfather Dr.GK Agarwal, Grandmother Anita Agarwal and Uncle Anshul Agarwal encouraged me.
Question: How to reach KBC?
Naivedya: First I tried jokingly, Amma said you can. I got a call for online audition. After 10 days the written and oral test took place. On October 24, the call came for the final selection. On November 25 also, Naivedya will play that will broadcast in KBC.