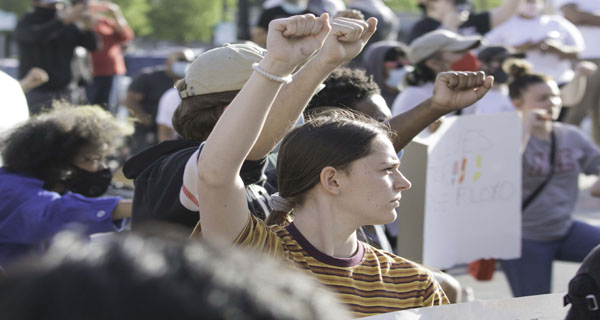 New York City will be under a curfew from 8 pm to 5 am the next morning till Sunday to curb criminal acts emerging from protests over the death of black man George Floyd, Mayor Bill de Blasio said on Wednesday.

Monday's curfew, the first in the city since 1943, started at 11 pm and did not stop looters from breaking into stores in Manhattan as soon as night fell.

Over 200 people had been arrested before the curfew took effect on Monday night, and the whole night saw more than 700 arrests made, most of whom were youths, according to the New York City Police Department (NYPD).

The NYPD said that one officer was seriously injured by a hit-and-run driver in the borough of the Bronx Monday night, while another was hit by a car when trying to stop a burglary in Manhattan.

"We saw vicious attacks on police officers. That is wholly unacceptable," said de Blasio at his daily briefing. "Anyone who attacks a police officer attacks us all."

Starting on Tuesday, no traffic would be allowed in a large part of Manhattan as soon as the curfew begins, with exceptions made for residents, essential workers, buses, and truck deliveries, according to the NYPD.

New York State Governor Andrew Cuomo said he was "disappointed and outraged" by what happened Monday night, saying the criminal activity hurt everyone.

He criticized the city's preparedness for Monday night's chaos, saying the mayor underestimated the scope and the duration of the problem.

Though the NYPD doubled its police presence to 8,000 officers on Monday, the governor said there should be more.

The governor has said he has the National Guard on standby, but de Blasio has rejected the idea of having them deployed in New York City, saying it is not wise.

"When outside armed forces go into communities, no good comes of it. We have seen this for decades," said the mayor.

Protests continued on Tuesday in the city, with thousands of people, mostly students of various ethnic groups, walking and chanting slogans such as "No justice, no peace" in a largely peaceful manner by the afternoon in Lower Manhattan.

Several streets were closed for demonstrations, and helicopters kept hovering above the moving crowds.

Scores of police officers were dispatched to some key locations such as the plaza outside the NYPD headquarters in Lower Manhattan, Union Square and Barclays Center in Brooklyn.

Most of the shops in downtown Manhattan have had plywood installed over their windows and entrances, and workers were boarding up more shops on Tuesday afternoon, bracing for another potentially violent night.

So far, the city has arrested nearly 2,000 people since the protest erupted Thursday. More than 50 police officers have been injured, according to the NYPD.