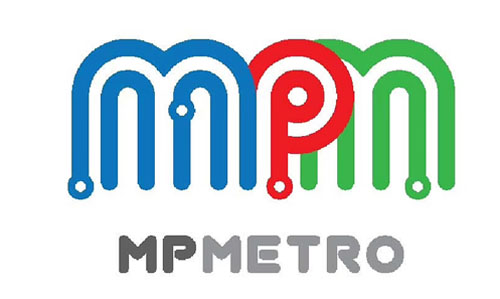 Chronicle Reporter, Bhopal-A new -LOGO- has been created for Madhya Pradesh Metro Rail Corporation Limited. It has included the primary colours of the spectrum i.e. blue, red and green. The blue color signifies responsibility, the red color indicates energy and the green color indicates safety. The three letters displayed in the metro ‘logo’ denote the line tracks of the metro and various dots representing the metro stations. The purpose of the ambitious mega-project is to make mass development and rapid speed transportation accessible to the common people. This creative ‘logo’ has a great visual appeal, which is global in nature. This MP METRO is ready to be introduced not only to the state but also the world.
The metro rail project is being implemented in Bhopal and Indore cities under Madhya Pradesh Metro Rail Corporation Limited. About 30 km of two approved metro corridors from AIIMS to Karond Chauraha and Bhadbhada intersection to Ratnagiri Tirahe in Bhopal is being constructed. The construction work is being done on about 31.5 km of approved Metro Ring Corridor (Bengali Square-Bhanwarsala-Airport-Palasia-Bengali Square) in Indore.
Madhya Pradesh Metro Rail Corporation Limited is being reorganized. The meeting of the joint venture of the Government of India and the Government of Madhya Pradesh was held in December last year. The joint venture consists of 5 each nominated directors of the Government of India and the Government of Madhya Pradesh. It will be able to take all decisions related to Madhya Pradesh Metro Rail Corporation limited.
Urban Development and Housing Minister Bhupendra Singh has said that the work of Metro Rail should be completed within the time limit. He has said that Chief Minister Shivraj Singh Chouhan is also constantly reviewing this project. Singh informed that a new ‘logo’ has been created for Metro Rail. Tenders are being issued for Bhopal and Indore metro rail stations moving towards the next phase of construction. DDC has been appointed for the metro rail depot near Subhash Nagar in Bhopal city and Gandhinagar in Indore city. Action is being taken to invite tenders of Indore and Bhopal soon after technical examination for construction of depot by DDC.