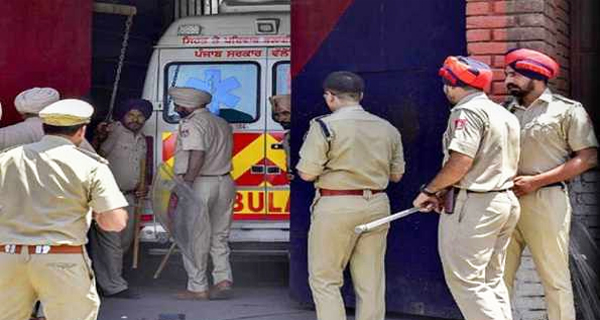 A group of five armed Nihangs attacked a police party on Sunday morning and chopped off an Assistant Sub Inspector's hand, when they were asked to stop their car at a vegetable market in Sanaur town of this district.

The incident occurred when the police personnel tried to stop their vehicle but instead of stopping, they crashed their car against the barricades installed there. "As the car stopped, the Nihangs attacked the police party with swords and iron rods when the police asked them for curfew passes", sources said.

Two more police personnel were injured in the gruesome incident. The perpetrators fled from the spot after the attack.

Meanwhile, the ASI has been referred to PGIMER, Chandigarh, for surgery and six other cops have been admitted to two hospitals in Patiala.
Patiala SSP Mandeep Singh Sidhu said that police teams have surrounded the Khichri Sahib Gurdwara and sealed the village with three-tier security so that no one can escape.

Meanwhile, police have arrested seven attackers and urged others to surrender. Many other Nihang leaders, including Buddha Dal Nihang faction Head Baba Balbir Singh, also requested the accused Nihangs to surrender but the accused have not yet turned out. PGI sources told UNI that the surgery of the injured cop has already started.