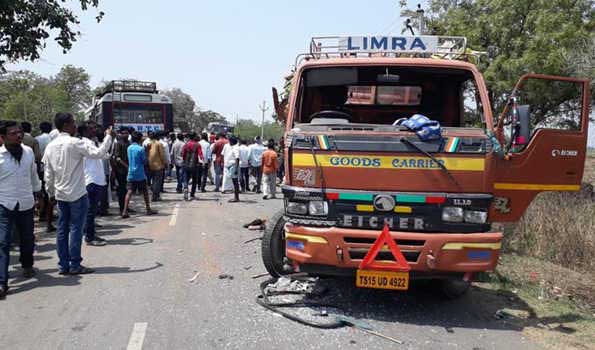 Hyderabad, Nine people were killed and 22 injured in two separate road accidents in Medak district of Telangana on Monday.Police said, six women were killed on the spot and 20 others injured when the DCM van in which they were travelling was hit by a Telangana State Road Transport Corporation (TSRTC) bus on the outskirts of Sangaipet village in Medak district.The injured were shifted to Government hospital in Medak. They were returning back after attending a function, police said,In another accident, three people were killed on the spot and two others injured when an Omni van in which they were travelling rammed into a stationary lorry on the National Highway-44 in Narsingi Mandal of Medak district in the early hours of today.The accident occurred when the victims hailing from Dammannapet village were returning back after seeing off their relatives at Rajiv Gandhi International Airport (RGIA) in Shamshabad near here, police said.
The injured were shifted to Gandhi Hospital here for treatment.Cases were registerd in both the accidents and further investigation is underway.