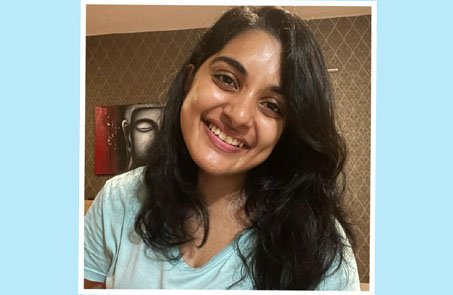 Nivetha Thomas is one of the most popular actresses, who is known for her performances in films like Darbar, V, Vakeel Saab, Ninu Kori and many others. She also made a name for herself as an actress who can pull off any role with ease and also gave herself credibility as a versatile actress. The actress enjoys a huge fan base and is also an avid social media, who shares little details of her day-to-day life. Nivetha took a day off from her busy schedule and pampered herself.
After scoring massive success with V and Vakeel Saab amid pandemic and having a bunch of movies lined up, Nivetha took a break to enjoy some 'me time' to pamper herself. She went on a date with herself and called it 'pursuit of happiness.' The actress shared a video of how she spent her day off and it includes exploring the city, having yummy food, taking a stall at Charminar, buying bangles, writing a diary, watching shows and having a good sleep. Well, that looks like one eventful day. Nivetha feels the same as she mentioned in the video, 'happy tummy happy me.'
On the work front, Nivetha received the biggest hit of 2021 so far with the Pawan Kalyan starrer Vakeel Saab.  Her acting in the movie got critically acclaimed. She is currently filming for the Telugu remake of the South Korean action-comedy Midnight Runners (2017) co-starring Regina Cassandra. The movie is directed by Sudheer Varma and bankrolled by Suresh Productions. The shooting is currently in progress.