No compromise with dignity of J&K, Ladakh; invited leaders to attend APM: PAGD 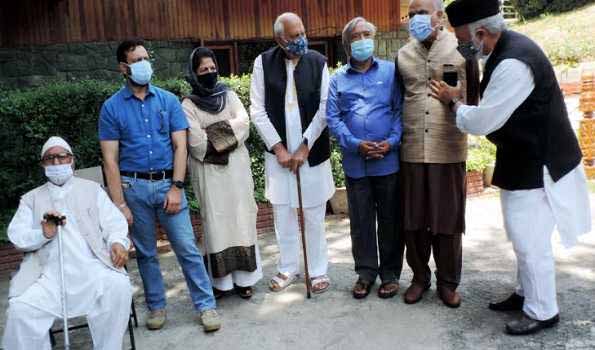 Srinagar, Jun 22 (UNI) Asserting that there will be no compromise with the dignity of the people of Jammu and Kashmir, the Peoples’ Alliance for Gupkar Declaration (PAGD) on Tuesday announced that all its leaders, who have been invited by the Centre, will attend the All-Party Meeting (APM) chaired by Prime Minister Narendra Modi in New Delhi on Thursday.
Meanwhile, Awami National Conference (ANC) vice-president Muzafar Shah, a constituent of the PAGD who has not been invited for the APM, said that there will no compromise on Article 370 as guaranteed under the Indian Constitution.
“Peoples Democratic Party (PDP) president Mehbooba Mufti, CPI(M) leader Mohammad Yousuf Tarigami and I will attend the meeting called by the Prime Minister to put forth our demands. We are confident that we will put our stand before the Prime Minister and the Home Minister,” National Conference (NC) president and PAGD chairman Dr Farooq Abdullah, who was flanked by the alliance leaders, told reporters after the meeting.
The meeting of PAGD leaders was called at Dr Abdullah’s residence on Gupkar road to discuss the Centre’s invitation to mainstream political parties in Jammu and Kashmir for a meeting which will be presided over by Prime Minister Narendra Modi at New Delhi on Thursday.
The PAGD leaders said though there is no set agenda of the meeting, we will put forth our demand including restoration of special status and release of political detainees. “We will accept any decision of the Centre which will be in favour of people of J&K and Ladakh. But, we will reject any such proposal which we considerate against the interest of the people,” they added.
Dr Abdullah, who is the Member of Parliament (MP) from Srinagar, said that the alliance leaders will attend the meeting to know what the Centre has to say and would also put forth the demands of the people. “Everyone, including Mehbooba, Tarigami and I, will talk in the meeting as we all have been invited individually and not as an alliance. Everyone knows our stand. The Centre has not fixed any agenda. We can talk about everything there,” he said.
The PAGD chairman said that he is hopeful that the leaders, who have not been invited, will be formally asked to attend and represent their respective parties in the meeting.
Answering a question about reports that she wanted Dr Abdullah to attend the meeting on her behalf, Ms Mehbooba said as the head of the PAGD is was an obvious decision to let him represent all of us.
However, she said that Dr Abdullah has asked all the three members of the PAGD to attend the meeting as they were invited individually. “We are not against dialogue… you all know that the PDP patron and former chief minister Mufti Mohammad Syed always advocated for dialogue. But, we want Confidence Building Measures, including release of political and other prisoners in view of COVID pandemic,” she said.
Ms Mehbooba said if the Centre wanted to reach out to the people of J&K, who have been humiliated from the last two years; it should have at least released these prisoners lodged in different jails across the country.
“What every agenda the Centre has, we will put forward our agenda in front of them. We will also seek release of political and other prisoners. If they can’t be released, they should at least be transferred to the jails in J&K so that their families can meet them,” she added.
The PAGD vice-chairman said that they will inform the Centre that the revocation of Article 370 and Article 35 A were revoked illegally and should be restored immediately. “We will tell them that without the restoration of the special status of J&K peace can’t prevail in J&K,” she added.