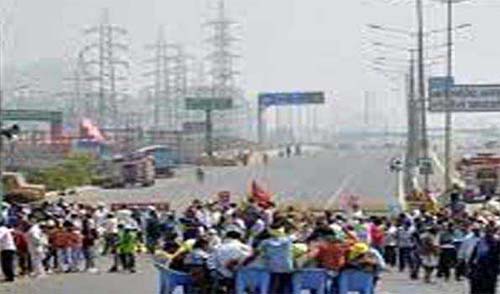 Lucknow, 27(UNI) The farmers' sponsored Bharat Bandh on Monday against the three new agricultural laws of the Center has had no significant impact in Uttar Pradesh.
Though the main opposition parties in the state including Samajwadi Party, Bahujan Samaj party, Congress, Rashtriya Lok Dal, AAP and others have extedned their support to the farmers Bharat Bandh, but on the other hand traders and industry have distanced themselves from it.
The Yogi Adityanath government is ready to deal with any unwanted situation that can arise under the guise of this protest.

The state government has also beefed up the security arrangements at all the places in view of the support extended by the opposition parties to the farmers in the state.
Farmers' organizations, who have been sitting on dharna on the borders of Delhi for the last 10 months against the three new agricultural laws of the Central Government, have called for a Bharat Bandh on Monday.

A report from Ghaziabad said that several roads connecting going towards the national capital have been blocked by the farmers. The traffic on NH 24 have also been affected.
Farmers were protesting at the Ghazipur border, forcing the authorities to close the traffic movement from UP towards Ghazipur.
Bharatiya Kisan Union(BKU) spokesperson Rakesh Tikait told the media at the Ghazipur border that ambulances, doctors or those going for an emergency will not be stopped. "We've not sealed down anything, we just want to send a message. We appeal to the shopkeepers to keep their shops closed for now and open only after 4 pm. No farmer is coming here from outside," Mr Tikait said.

With the failure of the previous Bharat Bandh called by these organizations, the impact this time too is likely to be limited to Delhi and adjoining states. Farmer organizations may have given assurance of not disrupting emergency services during the protests, but the Yogi Adityanath government is on alert. The government has taken measures to prevent anyone from facing troubles during this period.
Traders have directly shied away from the farmers' call for Bharat Bandh against the agriculture law. Major organizations have said that all big markets will be opened. All the leaders said that business will go on as usual. They claim that traders have nothing to do with it and business will be done as usual in the state.

However an alert has been issued in UP in view of the announcement of Bharat Bandh on Monday in protest against the Agriculture Act.
ADG Law and Order Prashant Kumar said here on Monday that strict instructions have been given to be extra vigilent at all other major places including railway station, bus stands etc.
Around 28 additional companies of PAC have also been kept on stand by for law and order duty at sensitive places in the state.

The ADG says that there will be tight security arrangements, especially in the districts of western UP so that the peace is not disturbed.
"Along with this, the police officers have also been asked to maintain constant communication with the farmer leaders. During this time videography will also be done everywhere and it should be ensured that there is no inconvenience is caused to the common people. Instructions have also been given to deal strictly with the mischievous elements who create any kind of disturbance in today's protest," ADG said.