‘No poor will remain starved, all will get ration’ 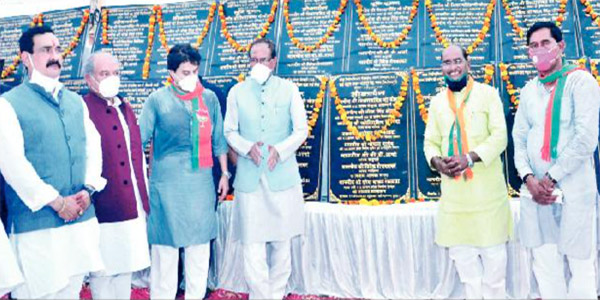 Chief Minister Shivraj Singh Chouhan has said that the government is committed for the welfare of weaker sections. No poor will remain starved in the state. Ration will be given to every poor. Whether it is arrangement of education for children of poor families or helping the needy under the Sambal Yojana, the state government is working promptly to support them. Chief Minister Chouhan was addressing the foundation stone laying and inaugural function of development works, held in Pohri of Shivpuri district on Friday.

On this occasion, Chief Minister Chouhan along with the Union Minister for Agriculture, Panchayati Raj and Rural Development Narendra Singh Tomar, Member of Rajya Sabha Jyotiraditya Scindia and Minister for Home Dr. Narottam Mishra inaugurated and performed bhumi-pujan of development works costing approximately Rs. 300 crore. Chief Minister Chouhan stated that the state government will give food grains slips by finding out each and every poor and provide ration to them at the rate of Re. one per k.g. In this connection, a grand campaign will be launched in the state from September 16. He instructed the District Collector, present at the programme to ensure that no poor should be deprived of eligibility slip in the district. Chief Minister Chouhan has said that the state government will do justice with the farmers even on loan waiver.

The government has taken a decision to restart the Sambal yojana, made for the welfare of farmers and poor. Similarly, schemes for helping children of poor, in pursuing higher education have also been continued. The government will bear the fees of the children of poor for pursuing studies in IIT, IIM and Medical institutions etc. He further mentioned that the recruitment process will be started soon. Opportunities for employment will be provided to youths. On the issue of OBC reservation, raised by youths during the programme, Chief Minister Chouhan assured that justice will be done with all.

The government will take appropriate decision in this matter. Union Minister Narendra Singh Tomar has said that foundation stone of dam on Sarkula river has been laid and now this project is taking its final shape. People of the area will be benefitted by this. He further mentioned that the way the state government is working for the upliftment of weaker sections, is praiseworthy.