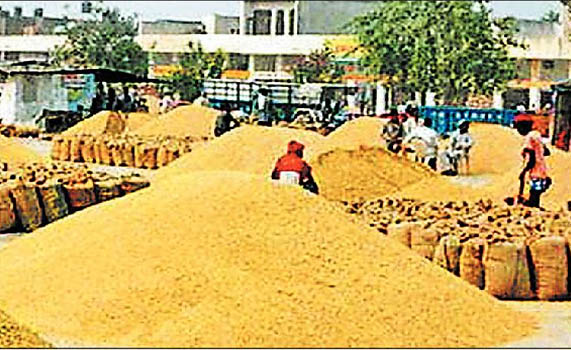 Traders on strike to oppose ban on export; write to Union Minister Piyush Goya; over 2.5 lakh tonnes of wheat stuck

Chronicle Reporter, Bhopal
Traders of Karond Anaj Mandi of Bhopal did not purchase wheat, gram and other grains on Tuesday in protest against the closure of exports. They will not buy tomorrow i.e. even on Wednesday. However, many farmers were not aware of the traders' strike. Due to this, farmers reached the market with about 500 quintals of wheat in 20 trolleys. Later they had to return.
Due to the closure of wheat export, many tonnes of wheat of the grain traders of Bhopal are lying at Kandla, Gandhidham and Mundra ports. Due to this they are losing crores of rupees. Same is the case with the traders of other districts of Madhya Pradesh. Due to this, a two-day strike has started in many districts including Bhopal, Narmadapuram, Sagar, Chhindwara.
There was desolation in Karond Mandi since morning on Tuesday. Auction of grains is done at 12 noon, but the traders did not reach. Because of this, the farmers who came to sell wheat and gram had to go back. The traders of Azad Market also did not buy food grains.
The voices of protest have started erupting among traders against the ban imposed on wheat export overnight two days ago. A letter has been written from Indore Grain Oilseeds Traders Union to Union Food and Consumer Affairs Minister Piyush Goyal on this issue. The traders of Indore wrote to Union Minister that due to the sudden ban, about five thousand trucks and 42 rakes filled with wheat are stuck on the way.

Relief sought from govt
Traders and farmers are seeing a loss of crores of rupees. Relief has been sought from the government in this matter. On the night of 13 May, the Directorate General of Foreign Trade (DGFT) had issued an order to completely stop wheat exports and can export wheat only after taking prior permission from the government in special circumstances. Before issuing the order, it was constantly being said by the central and state governments that India would supply wheat to the whole world. Barely four hours before the ban order in Indore Chief Minister Shivraj Singh Chouhan also, has spoken about exporting 20 lakh tones of wheat from MP from the forum of Start-Up Summit. According to Sanjay Agarwal, President of Indore Grain Oilseeds Traders Union and Minister Varun Pal, the government was continuously encouraging the exporters. In MP, the Egyptian team had reached to make wheat procurement deals. The officials and ministers welcomed it and got the traders to meet. In such a situation, supporting the stand of the government, all the traders were supplying wheat to the exporters from the state. In this, the maximum quantity of wheat was being sent from Indore and surrounding areas for export.
After the ban imposed on Friday night, now about 5000 trucks and 43 rakes in which traders have sent wheat for export are stuck either on the way or at the ports. A total of two lakh 63 thousand 400 tons of wheat are loaded in these vehicles. Exporters have refused to unload the goods sent from here citing government restrictions. The situation is that due to the stalling of the deal, there is not only the loss to the traders also but the traders will also have to bear the transportation cost of sending and bringing back those goods from their pocket. Hundreds of small-medium traders will be ruined in all this. In view of this, the traders' union has demanded from the Union Minister that the export of the vehicles which are on the way and the goods have been dispatched till May 13 should be allowed. The government should allow the goods of these vehicles to land at the ports. So that traders can get relief.

Got assurance from Board’s MD
The office bearers of the traders union also discussed the issue with Vikas Narwal, MD, MP Agricultural Marketing Board. In fact, on April 19, on the instructions of the MD, a special meeting was held in the local market to encourage traders to export wheat. The government had also announced exemption from Mandi tax on wheat exported. The traders told the MD of the Mandi Board that now the state government should help the traders trapped in this issue. According to traders, MD Narwal has assured that the state government will discuss with the Center to find a way out.