Not just party revamp, Cong plans to take BJP by the horns at Udaipur session 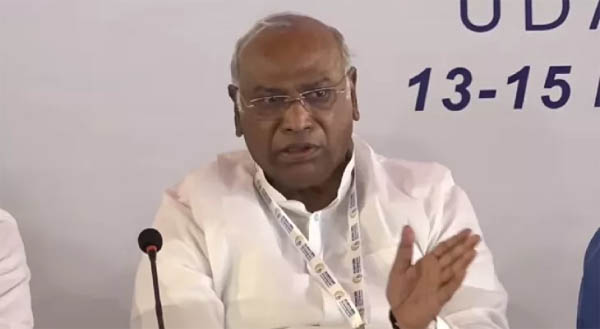 Udaipur, May 13 (UNI) Congress will deliberate on attacks on the Constitution, Institutions, rising communal tensions, attempts at rewriting history and eroding facts by the ruling BJP and its allies at its 'Chintan Shivir', besides revamping the oldest party to attract maximum youth power in its fold. Senior Congress leader and Leader of Opposition in Rajya Sabha Mallikarjun Kharge on Friday said discussion will be held on nine points that the party survey has brought up and these issues ate related to the party and the country. The three-day 'Nav Sankalp Shivir' in Rajasthan here will once more deliberate on its failure to strike back to its pre 2014 era. Addressing a press conference here along with other leaders of the party, Kharge, who heads the political issues committee constituted by the party high command, said,"Congress will deliberate on attack on Constitution, rising Communal tensions, national security and foreign relations. "On the outcome of the discussion, our political resolution will be made." Attacking the ruling BJP, the senior Congress leader said, "The basic fabric of Constitution is in tatters at the hands of BJP and its supporters. Institutions and autonomous bodies and federal character of the nation have been under attack from the ruling dispensation." Attacking the BJP over its preaching on 'nationalism', Kharge said: "BJP speaks of nationalism, and tries to teach it to Congress., who fought for nation's independence. "BJP leaders who never went to jail, not fought for nation's freedom are teaching nationalism." He said Congress is fighting on every front but have been a step behind in advertising it, so others are reaping the benefits. "We will continue to walk with those partners who believe in secular and constitutional fabric," Kharge added. On Congress internal revamp, he said, "Who would invest in you, if you do not have the best to offer ? We want to set right our house properly." Talking about the 'Chintan Shivir', Congress general secretary Ajay Make said, "This is going to usher in a new era. We are going to make big changes within in the organisation." "Our rivals have used new tools to march ahead of Congress, so now the oldest party will use democratic tools to reinvent itself. On organisation panel, you will see a change from bottom to top after the Chintan Shivir," he said. He further said, "Deliberation on having 50 per cent members less than 50 yrs of age in all Congress committees will be held." On one family, one ticket rule, Maken said, "There is a consensus on one family, one ticket. However, there is an exception if another family member wants to contest election he/she should have atleast worked for the party for five years. Discussion will be held in this regard." He further informed that there is a suggestion that no member should any post more than five years and the cooling period should be three years. "At present Mandals have numerous blocks, now that will be brought down after deliberation at 'Nav Chintan Shivir', Maken informed. Congress Deputy Leader in Lok Sabha Gaurav Gogoi said, "Where is BJP's solution to NRC, CAA, Naga peace talks, except for Modi's photo op and Amit Shah's committee? Today NE Industrial Policy started by UPA is being used to help PM Narendra Modi's friends."