Offline examinations start after one and a half year 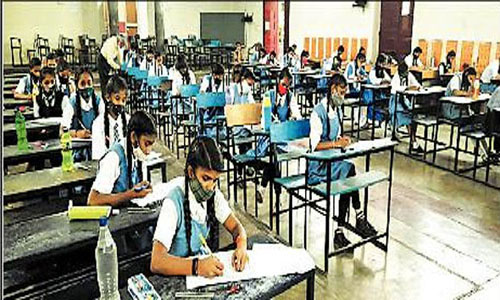 Chronicle Reporter, Bhopal
Schools have opened across the state including the capital Bhopal. In view of this not being backward, quarterly examinations have also been started in schools from 9th to 12th. The special thing is that after a year and a half, offline examinations are being conducted.
On Friday, in the first shift from 10:30 am to 1 pm, the students of class 9th and 11th gave the first paper. The students looked very excited. There was no fear in them about the exam. While the examination of Physics subject was taken on Friday i for the 11th class, the English paper was taken in the 9th class. The exam was held in the second shift from 1:30 am to 4 pm. On Friday, the paper of English was taken in class X and the paper of physics and business studies of class XII was taken.
Exams conducted on new pattern
The examinations of 9th to 12th are being taken on the new pattern changed by the Board of Secondary Education. In this 40 percent objective type questions have been asked in all the subjects. At the same time, the number of long answer questions has been reduced. However, the principals say that from August 5, classes from 9th to 12th have been started on alternate Day. For this reason, each class was held only for one or two days in a week. Now regular classes have been started from September 1.
In such a situation, about 40 percent of the course should have been completed for the quarterly examination, but so far only 5 to 10 percent of the course has been completed. Also, students should have got one, two days to understand the blue print issued by MP board, which could not be found.
Two and a half hour exam- This time quarterly exam is being taken on the new pattern. Due to this, the examinations of 9th to 12th are being taken for two and a half hours, because 40 percent objective questions, 40 percent short answer questions and 20 percent long answer questions are asked.
Covid guidelines are not being followed
In all schools, hundred percent students of both the classes have been called in one shift. Along with this, offline examinations are being taken. In such a situation, the Covid guideline was also seen to be followed in some schools of the capital. In Sarojini Naidu Girls School, two girl students were made to sit on a bench.

Examinations of 9th to 12th