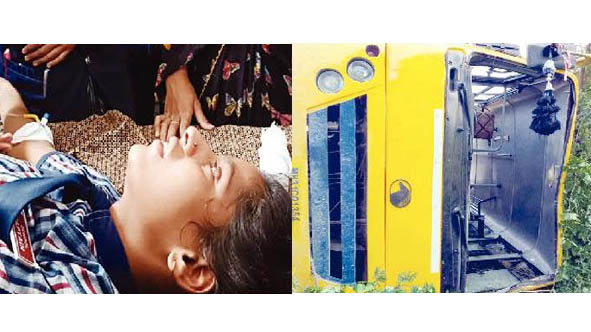 Chronicle Reporter, Bhopal
One student died and more than one dozen students were injured after a private school bus crashed uncontrollably near Chandrapur village in Rahatgarh block of Sagar district,
Two students have suffered serious injuries, and are being treated in the district hospital.
According to the students present on the bus, the driver of the school bus was talking on his mobile while driving the bus when the accident happened.
After getting the information, the Collector and the Superintendent of Police reached the spot immediately and were directed to register a case against the bus owner and driver.
The police with the help of the locals immediately took the children out of the bus and sent them to the Community Health Center Rahatgarh for treatment, where many children were discharged after first aid.
About six children have been admitted to the hospital as a precaution while the condition of two children is said to be critical and have been referred to Bundelkhand Medical College Sagar for treatment.