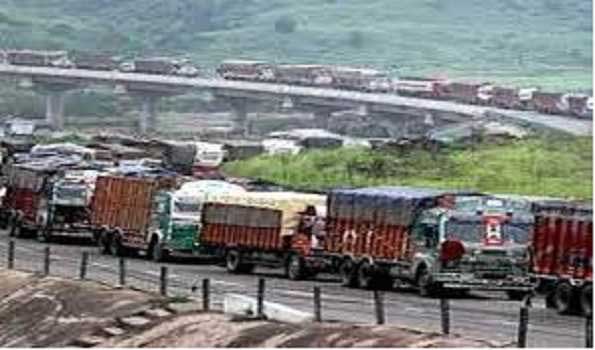 Srinagar, Only Kashmir-bound vehicles, which were stranded due to shooting stones and heavy traffic jam since Thursday, were on Friday allowed to move on the 270-km-long Srinagar-Jammu National Highway, connecting the valley with the rest of the country.Repair work was going on a war-footing after snow clearance operation was completed earlier this week on Srinagar-Leh National Highway, which remained closed for the past about three months due to accumulation of about ten to 12 feet of snow and avalanche threat. The snow clearance operation was also started on the historic 86-km-long Mughal road that remained closed due to accumulation of snow for the past about three months.
'Only vehicles, which are stranded at various places on the highway, would be allowed to move towards Kashmir,' a traffic police official told UNI.He said traffic was halted for couple of hours on the highway this morning due to landslide at Mom Passi. However, he said the National Highway Authority of India (NHAI) pressed into service sophisticated machines and cleared the landslide.'Traffic was resumed after receiving a green signal from NHAI and traffic police officials posted at different places on the highway,' he said.'There is extremely slow movement of vehicles on Jammu-Srinagar as toll plaza Chenani frequently closes,' he said, adding no fresh traffic would be allowed on the highway.

He said only one-way traffic will continue to ply on the highway till further orders on the highway as the road is very narrow and damaged at several places between Ramban and Ramsu where only one vehicle could pass easily.Meanwhile, massive traffic jams due to bad road conditions and bottleneck at Samroli toll plaza, besides high fare has irked commuters, travelling on Srinagar-Jammu national highway.
Commuters travelling on the national highway from Jammu to Srinagar told UNI that they have been moving at a snail's pace and were struck at various places on highway, due to traffic jams.

Meanwhile, commuters also alleged that the drivers are charging four times more than the usual fare to ferry people from Jammu to Srinagar. 'I had to pay Rs 2,500 as fare from Jammu to Srinagar, which otherwise is around Rs 800 to Rs 1,000,' a student told UNI.Similar, views were expressed by other people who were onboard Kashmir-bound vehicles.Frequent closure of the highway since its expansion has been a major cause of concern for the people living in Kashmir valley, where suspension of traffic results in increase in the rates of essential commodities.