Oppn to continue protest against suspension of MPs, future course to be decided on Wednesday 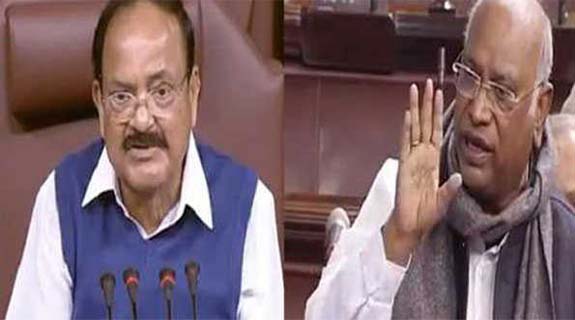 New Delhi,  (UNI) The Opposition on Tuesday came together on the issue of suspension of 12 MPs from Lok Sabha, with several parties staging a walkout in both Lok Sabha and Rajya Sabha on Tuesday.

A protest was also held in the Parliament complex by Opposition MPs, which was joined by Trinamool Congress as well, which had so far kept away from all Congress-initiated coordination meetings and protests.

According to sources, Rajya Sabha Leader of Opposition Mallikarjun Kharge plans to write to Chairman M Venkaiah Naidu on the issue. The Opposition will also hold a protest in the Parliament complex on Wednesday.

They have, however, not decided on boycotting the House again on Wednesday yet, and leaders said they will raise the issue again when the Rajya Sabha meets.

The suspended MPs, meanwhile, will continue to sit on protests in Parliament Complex.

"Suspending the MPs for what happened in the last session is against the rules. Government is trying to silence the Opposition. Its a conspiracy to end our freedom of speech. All parties are here to tell we are one," Kharge said.

Deputy Leader of Opposition in the Rajya Sabha Anand Sharma said, "As regrettable as the incidents were, it was forced upon the Opposition".

He also said the suspension was against the rules, as the Monsoon Session was prorogued.

"Even though Rajya Sabha is a permanent House, but the session was not continuous. The House was prorogued and summoned again by the President," he said.

In Rajya Sabha, the Chairman on Tuesday rejected the request by the Opposition to revoke the suspension, stating that the suspended MPs have shown no remorse.

Congress, along with DMK, Left parties, NC and some other parties staged a walkout. Shortly after that, Trinamool Congress and BSP also staged a walkout in the Upper House.

While the AITC had been skipping the Opposition protests led by the Congress, several MPs from the party joined a protest held by opposition leaders in front of the Gandhi Statue in the Parliament Complex.

Opposition MPs also tried to raise the issue in Lok Sabha soon after the House met, but were not allowed. Congress and several other parties staged a walkout. The AITC and Samajwadi Party, however, did not join the walkout.

Unruly and ugly scenes were witnessed during the passage of General Insurance Business (Nationalisation) Amendment Bill on August 11, during the Monsoon session of the House. As the situation went out of control, security had to be called in.