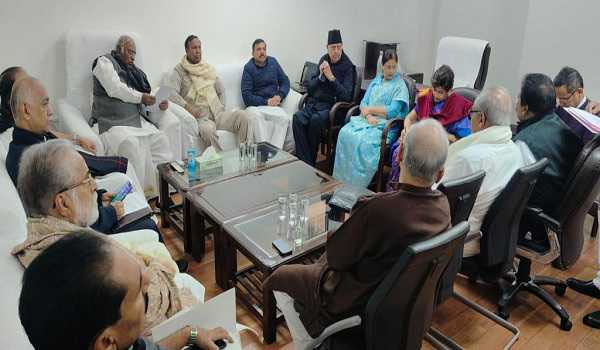 New Delhi, Dec 7 (UNI) A meeting of the like-minded Opposition was held to discuss strategy for the Winter session of Parliament, which will begin today.

Among the parties, Trinamool Congress and AAP participated in the meeting on Wednesday, which was held at the office of Leader of Opposition in Rajya Sabha Mallikarjun Kharge.

In the meeting, it is likely that Kharge, who is also the chief of the Congress, raised various issues, including price rise, India-China border situation and alleged eged interference into Constitutional institutions by the ruling dispensation.

On Tuesday, Congress leader in Lok Sabha Adhir Ranjan Chowdhury at the all-party meeting of the floor leaders, had raised these issues besides price rise, unemployment, alleged misuse of Central agencies , attack on Kashmiri Pandits and farmers MSP and demanded a discussion on the same.

Parliamentary Affairs Minister Prahlad Joshi had said , "On behalf of the government, I have assured that under rule and procedure, we are ready for discussion on any issue."

meeting of the like-minded Opposition