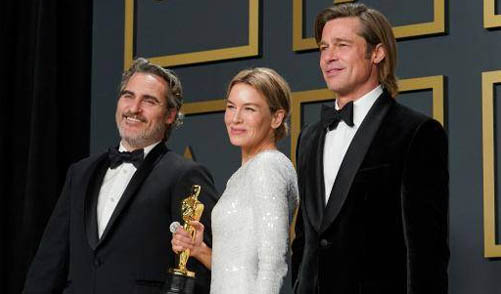 "In a world filled with award shows, what if an award show was actually a movie? Which stars would you cast?" are the opening questions asked in the 'movie trailer' announcement unveiling the first batch of Oscars 2021 presenters. As per Academy Awards' tradition, last year's acting winners Joaquin Phoenix, Renée Zellweger, Brad Pitt and Laura Dern will return to crown this year's acting winners.

Oscars 2021 producers Jesse Collins, Stacey Sher, and Steven Soderbergh shared in a statement, "In keeping with our awards-show-as-a-movie approach, we’ve assembled a truly stellar cast of stars. There’s so much wattage here, sunglasses may be required," via IndieWire.

Speaking of last year's winners, Joaquin, Brad and Laura became first-time Oscar winners as they won for Joker, Once Upon a Time in Hollywood and Marriage Story respectively. As for Renée, the 51-year-old actress scored her second Oscar for Judy after previously winning her first one for Cold Mountain.

The 93rd Academy Awards will take place on April 26, IST, at Union Station Los Angeles and the Dolby Theatre at Hollywood and Highland Center in Hollywood and international locations via satellite.