Out of turn promotions given to 51 police personnel 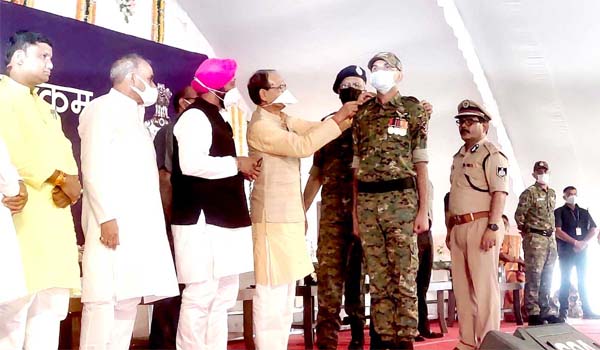 Chronicle Reporter, Bhopal
Chief Minister Shri Shivraj Singh Chouhan said that the internal security of the country is strong due to the indomitable courage and bravery of police personnel. Our police personnel take care of our internal security risking their lives. No outside forces can harm our country and state with these bravehearts to protect us. Chief Minister Shri Chouhan was addressing the promotion Alankaran programme before the police order at Balaghat Police Line.
Chouhan felicitated 24 police officers and jawans of Balaghat district and 27 of Mandla district by granting out-of-turn promotions to them by adorning them with stars on their shoulders and ribbons on their arms, for displayed indomitable courage in suppressing Naxal activities.
Chouhan said that when we all celebrate Holi, Diwali, Eid, these bravehearts of the police remain alert and guard us. The people of the state are proud of these jawans who lay down their lives for the security of the nation under such adverse circumstances. Chouhan said that these jawans have displaying unprecedented courage and suppressed the Naxalites for endangering our internal security. Naxalism has been uprooted.
Chief Minister Shri Chouhan paid floral tributes to martyrs at the Shaheed Smarak located at Police Line. Ministers, public representatives and officials were present on the occasion.