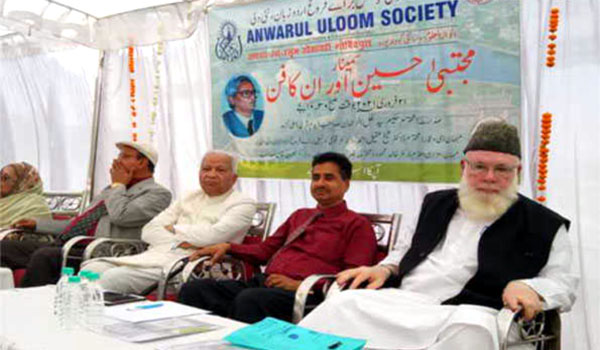 Bhopal, Feb 21 (UNI) Averring that the National Council for Promotion of Urdu Language (NCPUL) is leaving no stone unturned for the development of the Urdu language, council Director Dr Sheikh Aqeel Ahmed on Sunday said that more than one hundred new centers were opened during the COVID crisis.

"Even during the global pandemic, when the government cut the budget in almost all departments and institutions by 30 per cent, NCPUL was exempted from it", Dr Ahmed told UNI adding that the work related to development of Urdu language was never stopped and they have opened more than one hundred new centers amidst pandemic.

The NCPUL Director, who was speaking at the Anwar-ul-Uloom-Society program, here, apprised that technical facilities were also provided for conducting courses related to Urdu, Arabic and Persian languages.

He assured the populace that even if there is a similar crisis in future, the "development of Urdu language will not be affected."

Responding to a question, Dr Ahmed said that NCPUL has not confined its Urdu related seminars in just urban areas, rather they are also conducting them in villages. "For this, adequate budget is also being given like NCPUL. Now it is also up to the organizers of how they can take advantage of these schemes," the Director said.

Notably, the NCPUL, which is an autonomous body under the Ministry of Education, was set up in 1996 to promote, develop and propagate Urdu language.