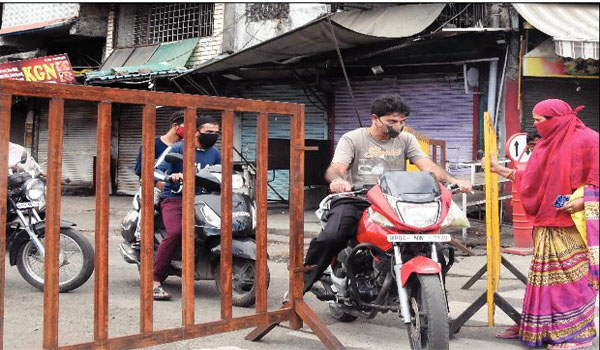 Chronicle Reporter, Bhopal
In Madhya Pradesh, 12,236 new Covid cases have been detected in the last 24 hours. During this time 98 corona patients have died. It is a matter of relief that with increase in the number of sample tests, the positivity rate is steadily decreasing. On May 3, a record more than 64 thousand sample test reports were received. While the positivity rate is 19.1%. After 15 days, the positivity rate has come down to below 20%.
According to the Health Department report, Corona's second wave peak recorded the highest positivity rate at 25.3% on 18 April, while the lowest was 10.4% on 1 April. But if we look at the data for the last 7 days, the number of infected is stable between 12 to 13 thousand, while the positivity rate is steadily decreasing.
The total number of people who died of corona in the state has crossed 6 thousand. On Tuesday, 1805 new cases of Covid-19 came in Indore, 1673 in Bhopal, 1096 in Gwalior and 711 new cases in Jabalpur.
According to the data, out of the total 6,00,430 infected people in the state, 5,08,775 patients have gone home after recovery and 86,639 patients are undergoing treatment. On Monday, 11,249 patients were discharged from hospital after recovering. For the last 7 days, it is continuously seen that infected patients in MP are recovering continuously.
Additional Chief Secretary Health Shri Mohammad Suleman said that according to the case prediction made by Dr. Mahendra Agarwal, Professor, IIT Kanpur, Madhya Pradesh has reached its Corona Peak. Now cases are decreasing.
In the state, 83.4 percent of the patients recovered in one day were home isolation patients and 3.9 percent of the patients were treated in covid care centres. In this way, 87.3 percent of the patients got healthier in home isolation and covid care centers without going to the hospital. The remaining 12.7 percent have recovered in hospitals and gone back to their homes. A total of 68 thousand 156 patients are in home isolation in the state. Of these, 97 percent of the patients have been contacted at least once. Home delivery of medical kits and health brochures is being done to 99 percent of the patients of home isolation.