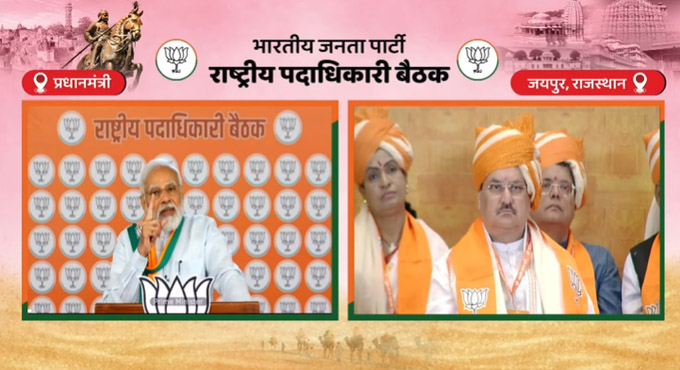 Jaipur, May 20 (UNI) Prime Minister Narendra Modi on Friday called upon party workers to reach out to every citizen to ensure that the benefit of government schemes reaches all beneficiaries, and told them not to sit in peace even as the party is in power in 18 states, and has over 400 MPs. Virtually addressing office bearers of the BJP at a meet being held in Jaipur, the Prime Minister said BJP is in power in 18 states, has over 1300 MLAs and over 400 MPs. "Even in Rajya Sabha after decades BJP is the party to have 100 MPs...One may think it is time to take it easy, but as BJP workers we have no right to sit peacefully," the Prime Minister said. He urged the party workers to reach out to more and more people, and also asked them to ensure last mile delivery of government schemes. PM Modi said party workers should go to every booth, every home, just as they do during polls, to ensure all beneficiaries are getting benefits of the government schemes. He also launched an attack at dynastic politics, and stressed that the BJP should force all other parties to talk about development in politics. "A subject that we have to constantly work on is to spread development politics everywhere in the country. All other parties should be forced to talk about development politics," he said. "Even today there are some parties whose ecosystem is working on diverting attention from main issues. We should not fall in their trap," he said asking party leaders to focus on issues of development and government schemes. He said "dynastic politics" is regressive, and said BJP has to constantly fight the dynastic parties. A three day national office-bearers meeting of the BJP started in Jaipur on Friday. Party president JP Nadda said the three day meet will deliberate and discuss several organizational issues, as well as the result of the recent polls in which BJP won in four out of five states.