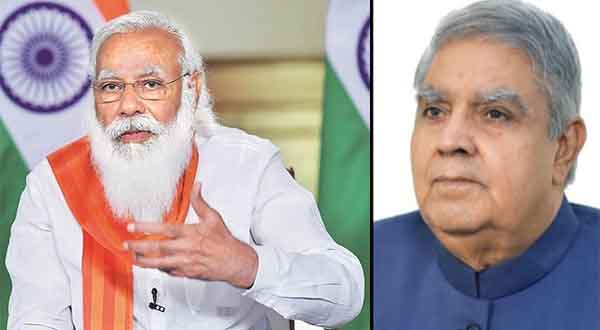 Kolkata, May 4 (UNI) Governor Jagdeep Dhankar on Tuesday said Prime Minister Narendra Modi had called him and expressed anguish and concern  over the violence in West Bengal in the post counting scenario across the state.
Political violences in the past 72 hours since Sunday evening have taken about 10 lives, including an 80-year-old widow and  hundreds of houses were vandalised rendering scores of people flee home for life.

"PM called and expressed his serious anguish and concern at the alarmingly worrisome law & order situation @MamataOfficial
I share grave concerns @PMOIndia given that violence vandalism, arson. loot and killings continue unabated.
Concerned must act in overdrive to restore order," Mr Dhankar said on  his twitter account. In the latest crime of killing a TMC panchayat member Shree Nibash  Ghosh was lynched to death at Ketugram in Burdwan on Monday evening. The crime happened over a dispute between the supporters of TMC and  BJP on untying the party flags at Malgram under Agordanha police station  where septuagenarian Ghosh was lynched to death. Police investigating the cause of death.