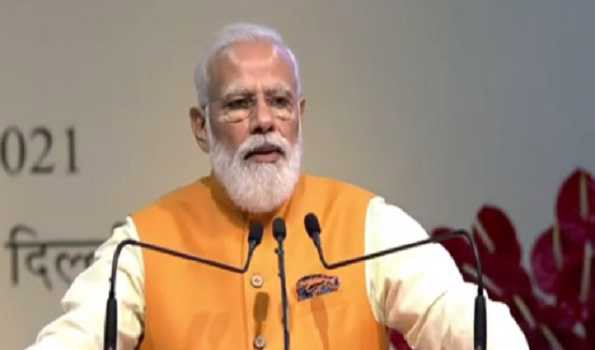 New Delhi, Oct 13 (UNI) Prime Minister Narendra Modi on Wednesday launched the much-awaited GatiShakti - National Master Plan for Multi-Modal Connectivity to build NextGen infrastructure in the country by cutting approval times for projects and completing them in time.
Unveiling the plan at Pragati Maidan here today, the Prime Minister said that GatiShakti will give strength to 21st century India and remove the roadblocks in the way of development.

Bringing all the stakeholders on one platform for planning and monitoring, GatiShakti seeks to reduce time-taking approval process and other regulatory delays.

In his Independence Day speech last August, PM Modi had said that GatiShakti will be launched to lay foundation for holistic infrastructure.
"In the near future, we are going to launch the National Master Plan of Prime Minister ‘GatiShakti’ which will be a huge scheme and fulfill the dreams of crores of countrymen. This scheme of more than 100 lakh crores rupees will result in new employment opportunities for lakhs of youth," he had said.
Instead of planning various projects in silos, projects under GatiShakti would be designed and executed with a collective approach. It will incorporate the infrastructure schemes of various central ministries and state governments like Bharatmala, Sagarmala, inland waterways, dry/land ports and UDAN among others.

GatiShakti will leverage technology extensively including spatial planning tools with ISRO imagery developed by BiSAG-N (Bhaskaracharya National Institute for Space Applications and Geoinformatics).
Speaking at GatiShakti launch event, Prime Minister Modi also took jibe at opposition parties saying infrastructure projects were seldom their priority and therefore did not figure on their election manifestos.
He noted that without all-round development of physical infrastructure there cannot be inclusive growth.

Modi said that GatiShakti will ensure that there are no time or cost overruns due to lack of coordination among various ministries and departments. He urged states to join the common platform to collectively work for creating world class infrastructure.
He stated that Indian products become costlier and uncompetitive in international markets due to high logistics cost and hence the need of the hour is to improve connectivity across the country.
Prime Minister Modi inaugurated the New Exhibition Complex (Exhibition Halls 2 to 5) at Pragati Maidan.
India Trade Promotion Organisation’s flagship event, India International Trade Fair (IITF) 2021 will be held from November 14-27, 2021 in these new exhibition halls.
Some top industrialists also joined the GatiShakti launch event and lauded Prime Minister's efforts to expedite infrastructure projects and improving ease of doing business.

"I can't think of any other government programme, anywhere in the world of such a large scale and technology-enabled, real time monitoring of such large scale development project," said Kumar Mangalam Birla, Chairman of the Aditya Birla Group.
He also congratulated Prime Minister Narendra Modi for 'two decades of self-less service to the nation.'
"It propels India into robust phase of growth through creation of sustained competitive advantage," said Mallika Srinivasan, Chairman & Managing Director of TAFE on PM GatiShakti while participating in the event.
Appreciating the government efforts and leadership of PM Modi, Tata Steel CEO T. V. Narendran said, "The last two decades of leadership in public office by Hon'ble Prime Minister has witnessed some of the landmark reforms and initiatives that this country has seen."