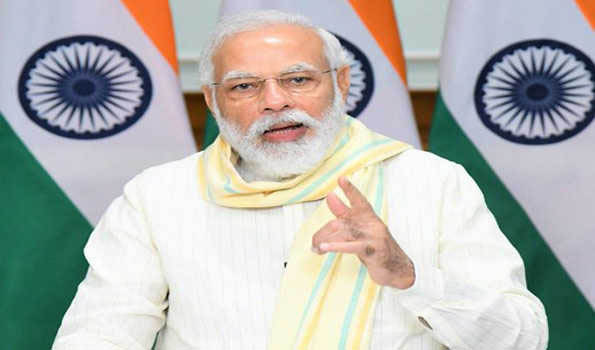 New Delhi, Apr 16 (UNI) Prime Minister Narendra Modi on Friday held a comprehensive review meeting to ensure adequate medical grade oxygen supply in the country, amid the reports of shortage of oxygen cylinders in many hospitals.
During the meeting, inputs from Ministries like Health, Department for Promotion of Industry and Internal Trade (DPIIT), Steel, Road Transport on the status and availability of the Oxygen were also shared with the Prime Minister, and he asked all stakeholders to ensure synergy across Ministries and State governments for the adequate supply of oxygen.
Mr Modi also took a detailed review of current situation of oxygen supply and projected use in the coming 15 days across 12 high burden states Maharashtra, Madhya Pradesh, Gujarat, Uttar Pradesh, Delhi, Chhattisgarh, Karnataka, Kerala, Tamil Nadu, Punjab, Haryana and Rajasthan.
An overview of district-level situation in these states was presented to the PM, the officials, privy to this development, said.
He was also informed about an estimate for projected demands of the states as on April 20, April 25 and April 30 and accordingly, 4,880 MT, 5,619 MT and 6,593 MT for the respective dates have been allocated to these 12 states for meeting their projected demand.
While discussing about the production capacity of Oxygen in the country to meet the rising demand, the Prime Minister suggested to increase production as per capacity of each plant and decided that the surplus stocks of oxygen supply in steel plants would be diverted for the medical use.
Mr Modi, while reviewing the situation, urged officials to ensure seamless and free movement of tankers carrying oxygen throughout the country and for this purpose, the Government has exempted all inter-state movement of oxygen tankers from registration of permits to enable easier movement.
The officials also informed the PM that the States and transporters have been asked to ensure tankers move round the clock with drivers working in shifts to ensure faster turnaround and adequate capacity to meet the surge in demand.
Cylinder filling plants will also be permitted 24 hour working with necessary safeguards whereas the Government has allowed Industrial cylinders to be used for medical oxygen after due purging. Similarly, nitrogen and argon tankers will be automatically allowed to be converted to oxygen tankers to overcome the potential shortage of tankers, the officials updated the Prime Minister.
He was also briefed about the efforts being made to import medical grade oxygen.