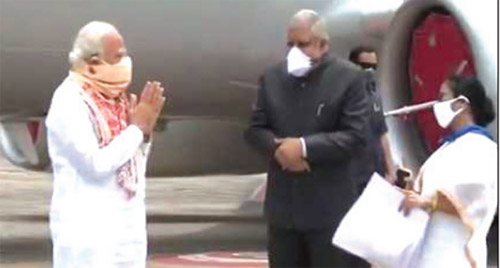 The Prime Minister said Rs two lakh would be given to the next of kin of the deceased and Rs 50,000 each to the persons who got seriously injured due to Cyclone Amphan. “All aspects relating to rehabilitation, reconstruction will be addressed. We all want West Bengal to move ahead. Centre will always stand with West Bengal in these testing times, ” he said.

“My thoughts are with all those who have lost their lives due to the cyclone. Centre and State are working together to provide all possible help to people. With the Governor and Chief Minister, an aerial survey was done. They have also briefed me on the prevailing situation, ” the Prime Minister stated. ‘’In the month of May,

the country was busy with elections and at that time we had to combat a cyclone that battered Odisha. Now, after a year, this cyclone has affected our coastal areas. People of West Bengal have been worst affected by it, ‘’ said Mr Modi. “The whole country is with you. The Centre will stand beside you at all times. I had come to meet all of you but not possible due to Covid19, “ he told reporters.