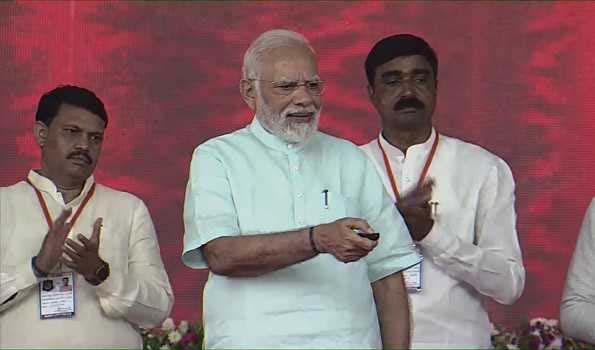 "It is my privilege to lay the foundation stone for infrastructure, sports and spiritual destinations in Gujarat during Navratri.... This city respects labour. This city values talent. Surat fulfils the aspirations of progress in life," the Prime Minister said here.

"Development is now reaching every household in Surat. The projects announced today are another step in this direction as these projects will improve the ease of living and doing business in Surat," he added.

The Prime Minister said that Surat is a great example of Jan Bhagidari and people from across India live in Surat.

"In a way, it is a mini India. In Surat, opportunities for growth are available for all. This spirit will be an important pillar for achieving the vision of a Viksit Bharat."

Modi said that in the last two decades, the government has been able to create 80,000 homes for the poor in Surat, uplifting the standard of living of lakhs of people.

He said that when the DREAM City project was completed, Surat will develop into the safest and most developed diamond trading hub in the world.

The Prime Minister is on a two day visit to Gujarat to inaugurate and lay foundation stone of various development projects worth around Rs 29,000 crores in programmes spread across Surat, Bhavnagar, Ahmedabad and Ambaji.

The Prime Minister also laid the foundation stone of Biodiversity Park, which is being built in an area of over 87 hectares from Dr.Hedgewar Bridge to Bhimrad-Bamrolli Bridge.

He inaugurated the Khoj Museum at Science Centre in Surat. Built for children, it has interactive displays, inquiry-based activities and inquisitiveness-based explorations.