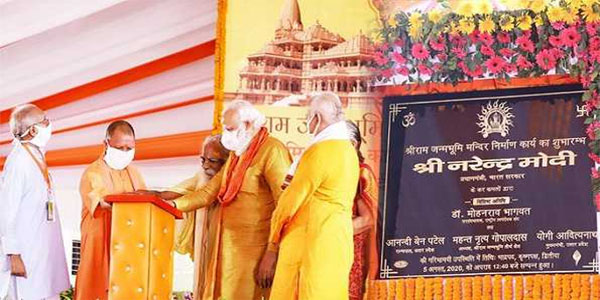 Amid chants of Vedic hymns, Prime Minister Narendra Modi on Wednesday laid the foundation for Ram mandir here and declaring that today is a 'golden day’’ when Ram Janmabhoomi 'stands liberated'.

Clad in a golden coloured dhoti-kurta, the Prime Minister performed ‘bhoomi pujan’’ and laid the first brick for a magnificent temple at 1244 hrs and 08 seconds amid chanting of vedic hyms and blowing of conch shells. He said "like August 15, today's day holds a similar significance for crores of people who devoted their lives for the cause of Ram temple’’ …August 5 is a ‘'golden day’' and Ram Janmabhoomi ‘’stands liberated today’’, he added.

“Nine shilas (bricks) with gold, silver and precious stones embedded on them were worshipped and laid as foundation,” Mahant Kamal Narain Das said.

A 40 kilograms silver plaque with details of the Ram temple movement and construction inscribed on it was worshipped and would be fixed at the main wall of the temple.

Champat Rai, general secretary of the Ram Janmabhoomi Teerth Kshetra Trust, announced that in 1989, Ram Bhakts had donated 2.75 lakh bricks for the construction of the temple. “We chose nine from the lot and used them to lay the foundation today,” he said.

Before the groundbreaking Prime Minister Narendra Modi offered prayers at the make-shift Ram Lalla temple, thus becoming the first prime minister of the country to offer prayers at the temple.

LK Advani, 92, and Murli Manohar Joshi, 86, the two BJP stalwarts who had led the campaign to build the temple in its early days, are said to have watched the live telecast of the event because of the coronavirus pandemic.

Home Minister Amit Shah, watched the event from his bed in a Gurugram hospital where the 55-year-old top BJP leader was admitted last week due to the virus.

After the ritual was over, the PM also put 'Tika' on his forehead and recited the mantras after the priests praying to all the God and Goddess for the completion of the Ram temple and well being of the universe.

Rai said that during the ground breaking ceremony soil and holy water from several religious places across India were collected. “We have received over 2000 earthen pots carrying holy water of various rivers and boxes carrying soil sent from various Hindu temples and Gurudwaras across India to bless the upcoming temple,” he said.

He said the temples in the United States, Canada and Caribbean Islands held a virtual service to celebrate the occasion. Over 2000 temples in Ayodhya have also joined in the celebrations by lighting lamps and chanting religious hymns.

President Ram Nath Kovid said in his tweet, “Felicitations to all for the foundation laying of Ram Temple in Ayodhya. Being built in tune with law, it defines India’s spirit of social harmony and people’s zeal. It will be a testimony to ideals of Ram Rajya and a symbol of modern India.”

The construction of the temple will be completed within 3 and half years. The original design for the Ram temple was prepared in 1988 but was changed in 2020 after the Court ruled in favour of Hindus. Chandrakant Sompura, the main architect of the temple said that as per new design Ram temple will be 235 feet wide, 360 feet long and 161 feet high. “The temple complex will have a prayer hall, a lecture hall, educational facility, saints residence and a hostel for visitors. It will have other facilities like a museum and a cafeteria,” he said.

“Once complete the temple complex will be the world's third largest Hindu shrine,” Sompura said.