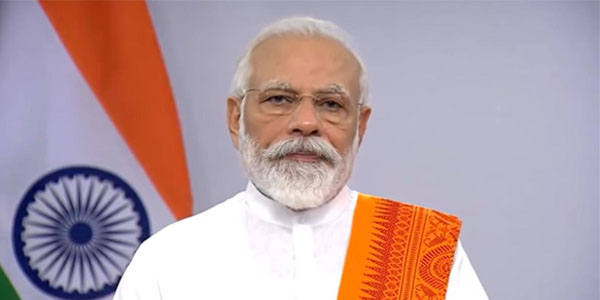 Prime Minister Narendra Modi on Friday maintained the newly-unveiled National Education Policy (NEP) will pave the foundation of a new India by preparing students for the future with skills and knowledge that will be required for the 21st century.

Speaking through video conferencing at the 'Conclave on transformational reforms in higher education under National Education Policy', he said the NEP 2020 will "lay the foundation of a New India, an India of the 21st century."

Referring to the need to make our students global citizens and have global standards but ensure they were rooted in their values, he said, "A new global standard is being set up. In sync with that, it was imperative that India updated itself. The shift from 10+2 structure to 5+3+3+4 is a step in that direction."

Stating that NEP will help curb the gap between education and research, he asserted that India can provide talent and technology to the world, and added that "technology has given us the medium to reach even to the last person of the country. Technology will help in better content and course."

Terming the reforms as a "game-changer", he said "Every country goes ahead by connecting its education system to its national values and reforming it as per its national goals. It's aimed at keeping its present and future generations 'future-ready'," he told the conclave.

The conclave is being organised by the Ministry of Education and University Grants Commission (UGC). Union Human Resource Development minister Ramesh Pokhriyal and Minister of State for HRD Sanjay Dhotre are participating in the event besides a number of dignitaries including the Chairman and Members, Committee for Draft NEP as well as eminent academicians/scientists.

Mr Modi expressed happiness that after the approval of NEP, which was approved after extensive discussions and brainstorming over three-four years and lakhs of suggestions, there had not been charges of any kind of bias or leaning towards one side.

He said, "After such a big reform has been done on paper, people were wondering how it will be worked out on the ground. That is, now everyone's eyes are towards its implementation."