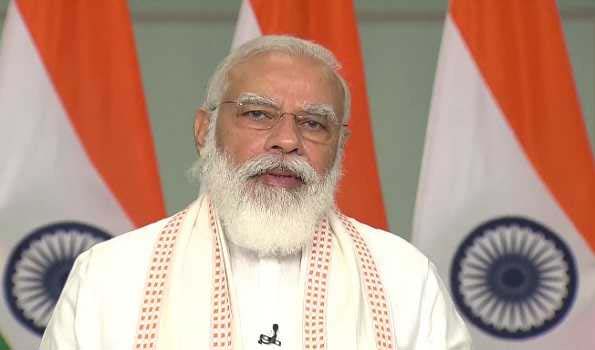 New Delhi, Aug 3 (UNI) Prime Minister Narendra Modi on Tuesday slammed opposition parties for disrupting the Monsoon Session of Parliament, and said the lawmakers should ensure that the dignity of the House is maintained.

The remarks came at a meeting of Bharatiya Janata Party's (BJP) parliamentary party this morning, as Opposition MPs held a strategy meeting and took out a cycle march against fuel price hike.

"The Prime Minister reiterated that the government is ready for any debate, attempts are being made to create an atmosphere for a debate," Parliamentary Affairs Minister Pralhad Joshi told the media after the meeting.

He said senior leaders like Rajnath Singh and Amit Shah have been talking to Opposition leaders.

Asked about the protest march held by Opposition MPs on Tuesday after a strategy meet that was called by Congress leader Rahul Gandhi, Joshi snubbed the former Congress president saying he cannot be taken seriously.

He also took a dig at Trinamool Congress leader Derek O'Brien, who in a Tweet compared passage of bills without debate to making "papri chaat," a common snack.

"Yesterday, a tweet was posted... The PM expressed anguish and said it is an insult to people who elected MPs," Joshi said.

O'Brien in his tweet has said 12 bills were passed within seven minutes of debate, adding "Passing legislation or making papri chaat!".

Union minister Mukhtar Abbas Naqvi also raised the issue in Rajya Sabha, and said "One member has stated the bills are being passed like 'chaat papri'".

He said the member should apologize.

At the BJP meet, the Prime Minister also talked about "happy news" that came in the month of July, and mentioned the achievements from Indian team at the Olympics, and the GST collection of over Rs. 1.16 lakh crore.

The Monsoon Session of Parliament which started on July 19, has been witnessing protests by opposition on the Pegasus snooping controversy and other issues.

Government has been blaming the opposition for the disruptions. As per government sources, Rs. 133 crore have been lost by the exchequer due to disruptions in Parliament.