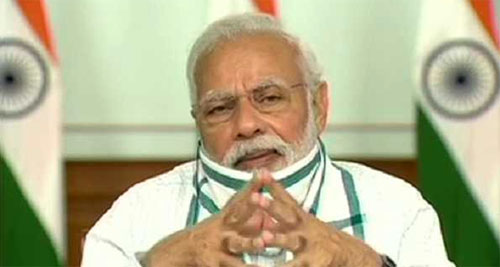 Prime Minister Narendra Modi is set to interact Chief Ministers of various states on Monday to carve out next strategy of tackling the novel coronavirus outbreak that has so far claimed 2109 lives in India.

The country entered the 47th day of countrywide lockdown with 3277 fresh cases, maintaining the upward trajectory of the virus cases, topping 3000, for the third consecutive day. At present, the number of active COVID-19 cases in the country stands at 41472.
The Prime Minister's meeting on Monday will focus on further increasing economic activities and easing the lockdown restrictions in the containment zones as the lockdown 3.0, which is almost halfway through, will end on May 17.

The Cabinet Secretary Gauba, via video conferencing, asked them to facilitate the Centre's initiatives such as movement of Shramik trains and required facilities for the people returned under Vande Bharat Mission.
Cabinet Secretary also emphasised that movements of doctors, nurses and paramedics should be totally unhindered and all steps be taken to facilitate and protect Corona Warriors

MIGRANTS
The problem of ferrying stranded migrant workers to their native states has been a major task for the government, especially after the death of 16 migrant labourers, the Centre has come under heavy criticism from the opposition parties.

In the same meeting, the Cabinet Secretary noted that more than 350 Shramik special trains have been run by Railways carrying 3.5 lakh migrant workers.
Mr Gauba requested the State Governments to cooperate with railways in running of more Shramik special trains whereas he acknowledged the cooperation of States on return of Indians from abroad under Vande Bharat Mission.

Delhi Chief Minister Arvind Kejriwal, too, on Sunday assured migrants in the national capital, that his government is making arrangements for them to take migrant workers back to their homes.

Addressing a digital press conference, the CM said that the Delhi government is already in talks with the central government to arrange for more trains for all the states.

Earlier, the Delhi government had sent buses to bring back hundreds of students stranded in Kota. The Delhi government has also sent about 2400 migrants from Madhya Pradesh and Bihar to their home towns through special trains. Medical examination and screening were thoroughly conducted before sending them back.