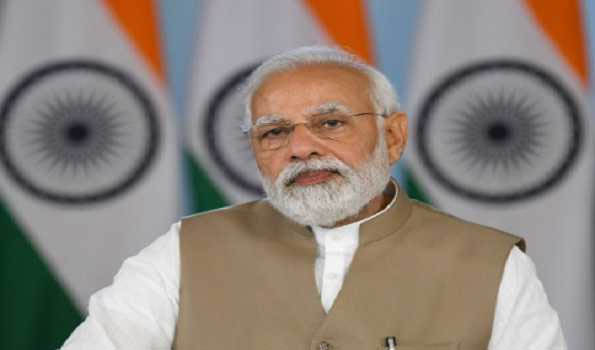 New Delhi, Sep 29 (UNI) Prime Minister Narendra Modi is all set to inaugurate and lay foundation stone of various development projects worth around Rs 29,000 crores in programmes spread across Surat, Bhavnagar, Ahmedabad and Ambaji of Gujarat on Thursday and Friday.

At around 11 am on 29th September, the Prime Minister will lay the foundation stone and dedicate various projects worth more than Rs 3400 crore in Surat, the PMO said.

Thereafter, Modi will travel to Bhavnagar. At around 2 pm, he will lay the foundation stone and inaugurate multiple developmental initiatives worth over Rs 5200 crore here.

He will lay the foundation stone of the World’s First CNG Terminal and of brownfield port at Bhavnagar.

The port will be developed at a cost of over Rs 4000 crore and will have state of the art infrastructure for the world’s first CNG Terminal along with world’s fourth largest lock gate system.

In addition to the CNG Terminal, the port will also cater to the future needs and demands of various upcoming projects in the region.

Further, according to the PMO, the Prime Minister will inaugurate the 36th National Games at Narendra Modi Stadium in Ahmedabad at around 7 pm.

He will also address athletes from across the country taking part in the National Games. During the event, Prime Minister will also inaugurate the world class 'Swarnim Gujarat Sports University' in Desar.

This landmark project is expected to transform the sports education landscape of the country, the PMO said.

At around 9 pm, Prime Minister will attend the Navratri Festival at GMDC ground in Ahmedabad.

On second day of his Gujarat visit on Friday, the Prime Minister will flag off Gandhinagar- Mumbai Vande Bharat Express at Gandhinagar station and travel on the train from there to Kalupur Railway Station at around 10:30 am.

At around 11:30 am, Prime Minister will flag off the Ahmedabad Metro rail project and will take a metro ride from Kalupur station to Doordarshan Kendra metro station, the PMO said.

The Prime Minister will inaugurate Phase-I of Ahmedabad Metro project at a public function at Ahmedabad Education Society in Ahmedabad at around 12 noon.

This comprises about 32 km of East-West corridor from Apparel park to Thaltej and North- South corridor between Motera to Gyaspur.

Thereafter, at around 5:45 pm, Prime Minister will lay the foundation stone and dedicate various projects worth over Rs 7200 crore in Ambaji. He will dedicate and lay foundation stone of over 45,000 houses built under PM Awas Yojana.

Modi will perform Darshan and Pooja at Ambaji Temple at around 7 pm. Thereafter, at around 7:45 pm, he will attend Maha Aarti at Gabbar Tirtha.

The PMO said that the inauguration and foundation stone of these wide ranging developmental projects reflect the commitment of the Prime Minister to develop world class infrastructure, enhance urban mobility and improve multi-modal connectivity.

It also showcases the continuous focus of his government on improving the ease of living of the common man, the PMO added.