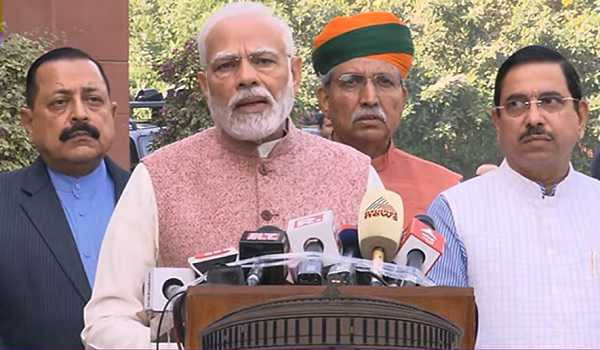 Speaking to media ahead of the commencement of the session, the Prime Minister urged political parties to give first time MPs more opportunity to participate in the discussions in the House.

"The winter session is important since it's taking place at a time when the country has got the opportunity to showcase India's capability to the world. The G20 Presidency shows India's potential," the Prime Minister said.

He said that the G20 is not just a diplomatic event but, he said, "The way expectations from India have risen and the way India is increasing its influence globally, India's G20 Presidency is a big opportunity."

"During informal conversation with MPs, I have come to know that young parliamentarians do not get the opportunity in Parliament. I want that the young MPs be provided more opportunities to take part in discussions," he added.

The Prime Minister said that he hoped the floor leaders will understand "the pain" of such MPs.

I urge all parties and MPs to increase the productivity of the House during the winter session, the Prime Minister said.

Modi said that even Opposition Members do not get the opportunity due to uproar and disruption in the House as the House gets adjourned and leads to losses.

I am confident that all parties will add value to the discussions in the House, he added.

The winter session of Parliament began on Wednesday with opposition parties planning to corner the government over price rise, falling value of rupee, alleged misuse of central agencies, AIIMS cyberattack and the LAC standoff with China, among other issues.

The session is scheduled to continue till December 29 -- 23 days with a total of 17 sittings.

The government has planned to introduce 16 new bills in the session and push for the clearance of eight pending legislations for which the Opposition has already alleged insufficient time in the 23 day long session.

The outcome of the Assembly polls in the two states is also likely to play out during the winter session.