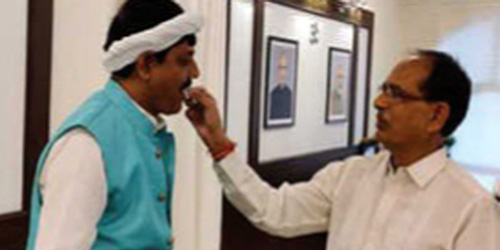 A blitzkrieg of political developments characterised Sunday in the Madhya Pradesh capital as Kunwar Pradyumna Singh Lodhi – who was elected to the Assembly from Bundelkhand region’s Malhara on a Congress ticket in 2018 – tendered his resignation from the Vidhan Sabha and formally entered ruling Bharatiya Janata Party ranks.

Mr Lodhi changed political loyalties in favour of the saffron camp at its state office in the presence of Chief Minister Shivraj Singh Chouhan, BJP state President-cumKhajuraho parliamentarian Vishnu Dutt Sharma and other leaders. Speaking on the occasion, Mr Lodhi averred, “My area’s development works constitute the primary purpose behind my joining the BJP.

This very day, the Chief Minister approved a Rs 450-crore irrigation project for the region.” The state dispensation is working with the principal objective of development and public welfare, Mr Chouhan emphasised, adding that blossoming of Bundelkhand figures among his priorities. “Erstwhile chief minister Uma Bharati plus Mr Sharma also hail from that part and its progress shall be ensured in consonance with their sentiments as well,” the veteran leader assured. Echoing the Chief Minister’s words, Mr Sharma said that a tremendous quantum of build-out was accomplished in earlier years under Mr Chouhan’s leadership and that would continue unabated.

With Mr Lodhi’s demitting his legislative position, the Congress strength declined to 91 in the 230- member House. The BJP commands 107 seats, the Bahujan Samaj Party two, Samajwadi Party one and there are four independents. As many as 25 vacancies exist. It is believed that Cabinet Minister Bhupendra Singh – also from Bundelkhand – played a crucial role in Mr Lodhi’s entry into the saffron side.