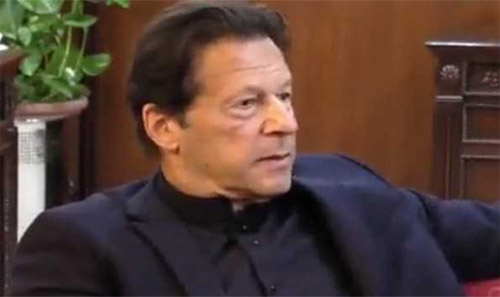 Islamabad, Nov 25 (UNI) Pakistan Prime Minister Imran Khan has termed the leaked audio clip having the conversation between Chief Justice of Pakistan Mian Saqib Nisar and an unidentified person on Nawaz Sharif, as 'a drama".

According to a report by Dawn, the Prime Minister on Wednesday said at the Kamyab Jawan Convention that the leaked audio tape allegedly of former chief justice Saqib Nisar is ‘a drama” and it (emergence of such tapes) started when the corruption of the Sharif family was exposed in the Panama Papers.

Referring to the recent allegation of disruption of Nawaz Sharif’s recent speech at the Asma Jahangir Conference, he said, “There was a function in Lahore where the chief justice and Supreme Court judges were invited and who addresses that event? A man who has been convicted by the Supreme Court and who has absconded from the country. It is unfortunate.”

He criticised the organizers for inviting both the Chief Justice of Pakistan and a “convict” to speak at the same event.

He said “It was unfortunate that the Chief Justice of Pakistan and a convict (Nawaz Sharif) were invited to speak at the same event.

“When Nawaz Sharif was convicted, he first raised the slogan “Mujhe Kyun Nikala” (why was I removed) and later “the army, the judiciary and I were maligned. I was called a brutal man”.

He also took a dig at Maryam Nawaz over the Panama Papers and said, “Where did this money [for the apartments] come from? You may call the courts bad, you may call the army bad and I have already been [dubbed] bad ... But answer from where did you get the money to buy those apartments.”

“On the contrary, Nawaz Sharif first told a lie in National Assembly, then came the Qatari letter and the Calibri font. They have not so far presented even a single paper [of evidence] about the financial source of flats,” he remarked.