Pak must prove its consistency between words and actions, act on terror: India at UN 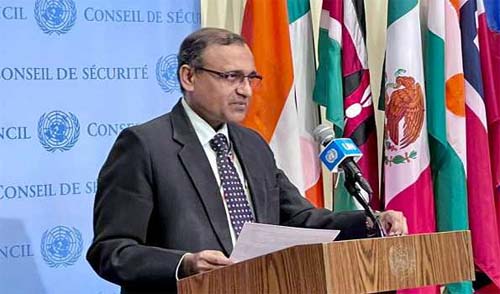 United Nations/Delhi, Aug 3 (UNI) Pakistan must prove its consistency between its words and its actions, by acting against terrorism, said President of the UN Security Council for the month of August Ambassador T.S. Tirumurti.

Addressing a press conference after taking over the presidency, Tirumurti, answering a question on Pakistan, said the onus is on Pakistan for creating a conducive atmosphere for talks, including by taking credible and verifiable action against terrorists acting out of its soil.

“The issue is that if there are issues between India and Pakistan it should be resolved bilaterally and peacefully. We have the Simla Agreement which provides for a bilateral discussion and resolution of issues. And this should be resolved in an atmosphere free of terror, hostility and violence.

“Therefore right now the onus is on Pakistan to create such a conducive atmosphere, including by taking credible and verifiable action not to allow any territory under their control to be used for cross-border terrorism against India. And Pakistan must prove its consistency between its words and its actions,” he said.

To an online question from a Pakistani journalist on India changing the status of Jammu and Kashmir, Tirumurti said that these were constitutional changes that were well within the Indian constitution and it was the prerogative of the Indian parliament.

To the Pakistani journalist persisting with his question, the Indian top official said that if anything needed to be changed “it is the vacation of Pakistan occupied Kashmir.”

“As I told you, Jammu and Kashmir is an integral and inalienable part of India. If there needs to be a change in status it is the vacation of Pakistan Occupied Kashmir,” he added.

On August 1, India took over the rotating presidency of the UN Security Council for the month of August. India’s two-year tenure as a non-permanent member of the Security Council began on January 1, 2021.