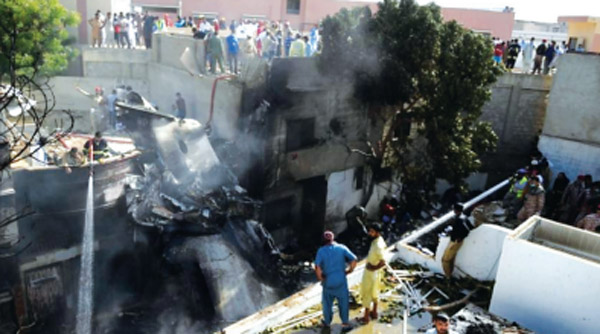 A Pakistan passenger plane, with over 100 people onboard, crashed at a residential complex near Jinnah International Airport in Karachi while landing on Friday afternoon. The number of casualties as well as injured could not be ascertained yet. Health Minister Azra Pechuho said it was still to early to ascertain the figures.

As per witnesses said the plane attempted landing two or three times before crashing at Karachi's Model Colony near the airport. Around 25-30 residents of the area have been injured in the accident and taken to the hospital, Dawn reported. "We don't know how many are injured and how many are dead. I am visiting hospitals [...] we were already in an emergency situation due to Covid-19 so doctors were alert. We have also alerted surgical units," the Health Minister said.

Director programming of 24 News Ansar Naqvi and Bank of Punjab president Zafar Masood were among the passengers. Masood's family has confirmed that he survived the crash, the report said. A transmission of the pilot's final exchange with air traffic control, posted on the website LiveATC.net, indicated he had failed to land and was circling around to make another attempt. “We are proceeding direct, sir — we have lost engine,” a pilot can be heard saying. Sindh Governor Imran Ismail said the plane fell in a populated area. "The concern now is of casualties of people in the area.