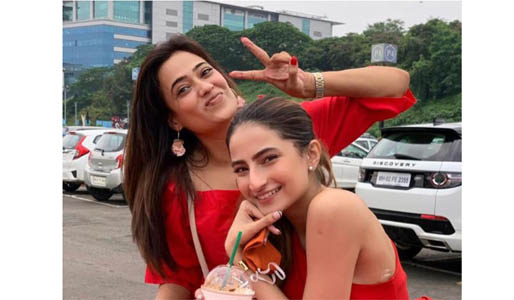 Telly star Shweta Tiwari’s daughter Palak Tiwari is quite a popular name on social media. The actress shot to fame with her debut performance in the music video, Bijlee Bijlee. Also featuring Harrdy Sandhu, the song went viral among listeners. Being the daughter of television actor Shweta Tiwari, Palak recently opened up about how she is used to comparisons with her mom.
In an interview with Etimes, Palak Tiwari shared, “Comparisons with mom are inevitable! In fact, I have grown up with these comparisons. I have heard comments like, ‘ Yeh aapke jitni sundar aur talented hogi kya (will she be as beautiful as Shweta)?’ Since I look more like my father, I’d also hear comments like, ‘ Arre, yeh aap par nahi gayi (Oh, she doesn't resemble you)’. I would punch my pillow dreading that my life was ruined because I didn’t resemble my mother (laughs),”
She added that Shweta helps her by appreciating her, she said, “My mom would keep telling me that I looked better. So, these comments don’t scare me anymore and I take them sportingly because I adore my mother and hold her in high regard." Palak said she wants to explore films and make her own identity in the industry. “I feel that my mother has done everything there is to do on television, so the pressure on me will be a lot more as the comparison will be direct.”
After the success of Bijlee Bijlee, Palak also featured in music video, Mangta Hai Kya, with Aditya Seal. Palak lives with Shweta and her half-brother Reyansh Kohli in Mumbai. She is the daughter of Shweta and her first husband Raja Chaudhary. She has been signed for Vivek Oberoi's film, Rosie The Saffron Chapter.