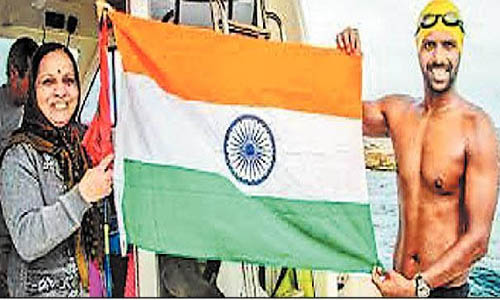 Bhopal
Chief Minister Shri Shivraj Singh Chouhan has congratulated international para swimmer of Madhya Pradesh Shri Satyendra Singh Lohia, for crossing 36 km long inaccessible channel of Arabian Sea by swimming.
CM Chouhan tweeted - "You have given a living proof that no goal is impossible if your passion is firm and your heart is dedicated". It is noteworthy that Satyendra Singh Lohia has crossed 36 km long channel from Dharamatal jetty to Gateway of India in the shortest time. He completed this exciting journey in 10 hours 3 minutes. Shri Lohia is a native of village Gata in Bhind district. Shri Satyendra completed his studies in Gwalior. He had earlier become the first Asian Divyang swimmer to cross the 42-km Katrina Channel in the US in just 11 hours 34 minutes.

Was conferred with Tenzing Norgay Adventure Award: Conferred with the Tenzing Norgay Adventure Award by President Ram Nath Kovind last year, Mr. Lohia is also the first Asian handicapped swimmer to swim the 42 km Catalina Channel in the US in just 11 hours 34 minutes. With the water temperature in the channel being around 12 degrees, there is always a danger of shark attack. Mr. Lohia had crossed this channel at night to avoid the strong winds during the day.

Triumphed over both English Channel and Catalina Channel: Lohia is the first para-swimmer from Asia to triumph over both the English Channel and Catalina Channel challenges. After crossing the English Channel in 2018, he had crossed Catalina Channel in the USA in April 2019 as part of an Indian para-athlete team. Satendra - who has 70% disability and cannot use his legs - swam the English Channel and made it to the Limca Book of Records.
Adding yet another feather to his cap, Satyendra Singh Lohia successfully crossed a 36 km long channel in Arabian Sea on Tuesday. Incidentally, it is considered one of the most difficult channels of the sea in India. He along with 3 other swimmers completed the distance in 10 hours three minutes.
Satyendra was accompanied by three other swimmers Rimo Saha from Kolkata, Elvish Hazarika from Assam and Ganesh from Maharashtra.
After finishing the swim, Satyendra said, "Today, I swam a distance of 36 km from Dharmatar in the Arabian Sea to the Gateway of India in Mumbai with my team. It took 10 hours, three minutes. This challenge is regarded as one of the toughest attempts to swim in open water in India."

Swim was risky due to presence of sharks: Lohia said this part of the Arabian Sea is full of sharks. Hence, it becomes more risky and tough for the swimmers to cross the channel. Through this challenge, our team gave the message that "disability is not physical; it is just a bad attitude of a person". Satyendra is a government employee in Indore. He was awarded the Vikram Award in 2014.