Party MPs pitch in for bringing back Rahul as party president 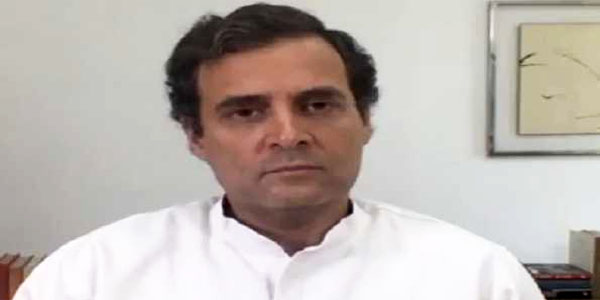 Congress MPs in the Rajya Sabha on Thursday made a pitch for bringing back Rahul Gandhi as party president, amid the political crisis faced by the party in Rajasthan.

Sources said that at a meeting of the party MPs, through video-conferencing, convened by Congress president Sonia Gandhi, several party leaders called for bringing back Rahul as party chief, at a time when the party needs rebuilding.

Sources said that party leaders KC Venugopal, Rajeev Satav, Bhupinder Singh Hooda, G C Chandrashekher, Digvijay Singh and Shashi tharoor, among others, made a strong pitch for bringing back Rahul at the helm at a time when the party needs an overhaul to stem its decline .

The sources said that the need to bring back Rahul at the helm is being increasingly felt due to his sharp attacks on the NDA government and Prime Minister Narendra Modi on the downturn in the economy, the mismanagement of the COVID pandemic and failure to prevent Chinese incursion on Indian territory.

Party leaders feel that it is only a young leader like Rahul who can rebuild the party amid the crises faced by the party in Madhya Pradesh and Rajasthan.

In the recent months, Congress lost power in Madhya Pradesh, one of the three heartland states it won in 2018, after Jyotiraditya Scindia defected to the BJP .

Currently, it is facing a crisis in Rajasthan as another popular young leader of the Congress Sachin Pilot has turned into a rebel.

Sources said that rahul did not attend Thursday's session.

Rahul had quit as the party chief in July last year following the debacle suffered by the Congress in the Lok Sabha polls.

Subsequently, Sonia Gandhi was persuaded to take over as the party's interim president.

Sources said that the current political situation in Rajasthan, where the Congress has accused the Governor of causing delay in calling a session of the state Assembly to enable Chief Minister Ashok Gehlot to prove his majority on the Floor of the House, was discussed at the meeting.