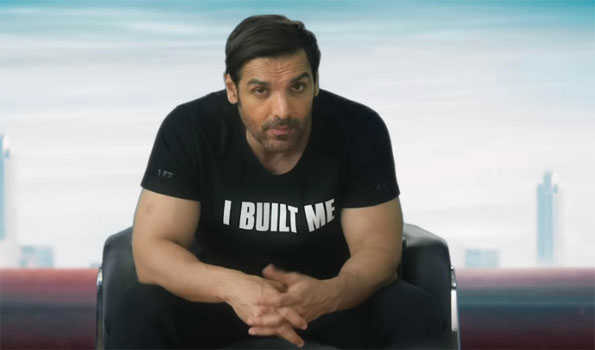 John is playing the menacing arch-enemy of SRK in Pathaan and he is relishing that this film is bringing back the old John Abraham from ‘Dhoom’, a film that made him achieve cult status among audiences with his bad boy on bike image.

In a video released by the producers, Yash Raj Films, John speaks about his character in Pathaan and says, “Jim is cool. Jim is dangerous and Jim brings back the old John Abraham from Dhoom! I totally love the action sequences of Pathaan because most of them are mobile.”

He adds, “One sequence was of course on motorcycles in the snow, one was on a truck so again we were moving, the third is in the air which is wow, fantastic. So, each one was in movement and they are fantastic.”

John, who is being praised for looking a million bucks in Pathaan, says he didn’t know that he had to flaunt a bare body in this action thriller.

He says, “I didn't even know that I had bare body shot in Pathaan, Sid surprised me!” However, since John is super consistent with his diet and has insane fitness levels, he didn’t need to transform his body to give the bare body shot!

He adds, “I think it's a lifestyle regime that I have, so I don't transform for a film. I want to believe that I'm always in a transformed state all my life and that's the way I want to be.”

John is gunning for SRK’s throat in Pathaan. SRK is making his return to cinemas after four long years and the hysteria around his comeback has taken the nation by storm.

John says, “I don't think just the entire nation. I think the entire world wants to see Shah Rukh Khan on screen, including myself, and I think he more than delivered the goods because he's fantastic in this film.”

It will release on January 25, in Hindi, Tamil and Telugu.