Pattas to homeless poor of all classes under Bhu-adhikar Yojana 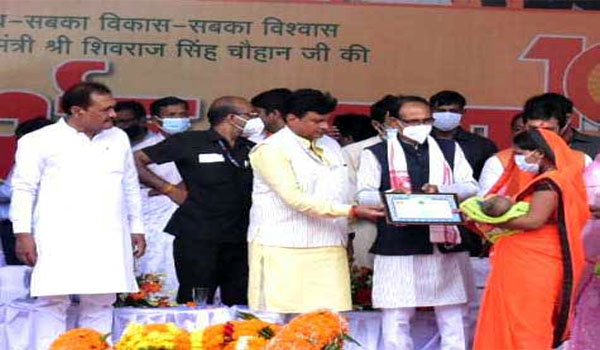 Poor will be identified through a survey
Chouhan reached Raigaon in Satna district and attended the Kothi Jandarshan programme from Raigaon. Addressing a huge public meeting at Raigaon, Chief Minister Shri Chouhan said that now every landless and homeless person will be given land patta for housing. Mukhyamantri Bhu-Adhikar Yojana is being implemented in the state from today to give land pattas to poor of every category. In the first phase of this scheme, the poor will be identified through a survey. After this, they will be given residential plots in the available government land. If government land is not available, private land will also be purchased and given to the poor. In this scheme, Satna district will be made a model.

No permission for limestone mine on farm land
Chouhan said that rumours are being spread about Raigaon area that a limestone quarry project is being made here in the entire area. All farmers should remain fully assured that limestone mining will not be allowed in the land where cultivation is done. Chief Minister Shri Chouhan said that the threat of Corona is not over yet. Those who have missed vaccination can get the first dose of vaccine in the vaccination campaign on September 27.