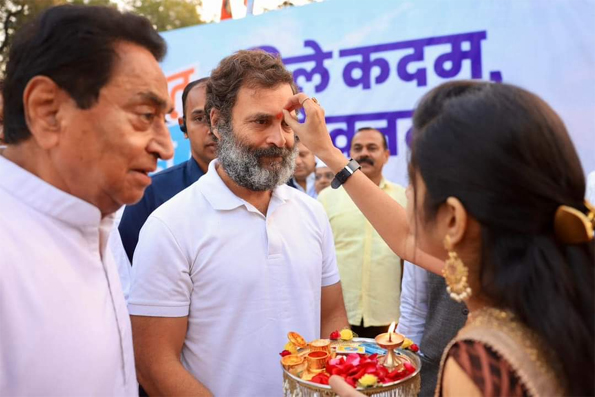 Chronicle Reporter, Bhopal
Bharat Jodo Yatra of Rahul Gandhi has entered Madhya Pradesh.Rahul said I walked 2000 km. This is not a difficult task. A farmer walks 30 to 40 thousand km in his life. He does the real work. What does he need? He does not get seeds, the prices of fertilizers double. He works 24 hours. Gets up at 4 in the morning. He eats half the bread, then when the time comes to sell his crop. People sitting in Delhi drop the MSP.

Small businesses are finished
Rahul said youth wants employment. Small businessmen provide employment. Small to medium size businesses give maximum employment. The employment is available from the public sector. Now they implemented demonetisation and GST. Small businesses are finished. They broke their spine. Youth cannot get employment in MP.
Rahul said RSS, BJP have controlled all the institutions. We thought there was only one way, so we hit the road. We wanted to meet people directly. We listened to them and met the small traders. We had not even thought that so much power, so much love would be seen in Telangana, Maharashtra, Madhya Pradesh.
Addressing the meeting, Rahul Gandhi said - We felt that the people of BJP have created an atmosphere of hatred, fear and violence in India. Be it the voice of the public, the voice of the farmers, the voice of small traders and labourers, we first tried to raise it in the Rajya Sabha and the Lok Sabha. Three black laws came for the farmers. PM did demonetisation. You ask any small businessman, today I was walking with them, all the businesses are ruined. By implementing 5 different GST, tax up to 28% is being charged.
As soon as we raised the issue in the Lok Sabha, the mike used to go off. We have friends from the press, but they never raise our concerns. The media does not raise the issue of the opposition, not just ours. Lok Sabha road closed. We won the elections in Madhya Pradesh. We had a government. Bought 20-25 corrupt MLAs by taking crores of rupees and formed the government.