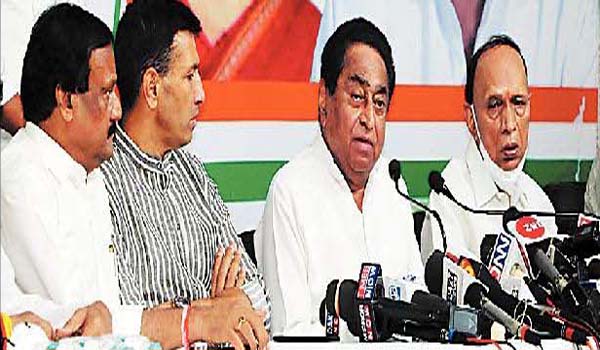 Bhopal: Former Chief Minister and Congress State President Kamal Nath said that during the tenure of Modi government lakhs of people have been monitored through mobile phone companies. Kamal Nath demanded an inquiry by the sitting Supreme Court Justice and said that the government should take the opposition leaders into confidence. He said that the investigating judge should also be such who has not been spied on before.
The former chief minister said that the Pegasus case was not disclosed by the Congress, but by international media organizations. He said that the Modi government illegally conducted espionage to topple Kumaraswamy's government in Karnataka. Spying to topple the government in Madhya Pradesh also cannot be ruled out. He alleged that the Modi government is doing the work of buying MLAs in Jharkhand. This incident is the biggest attack on our rights. He said that this has come to the fore in the last few days and in the next 15 days the matter will heat up.
Nath said that in view of the seriousness of the matter, France has started investigation. Other countries are also going to start investigation soon, so why is it not being investigated in India? He said other spy software like Phantom are also similar. He asked the government that have you bought other software also. Kamal Nath said that CERT had given a sensitive note in 2019.
The Congress leader said that the central government should tell whether this software was bought for the security of the prime minister or for the security of the country? Even if the government gives an affidavit that they have not bought it, then someone must have bought it. China may have bought it and get espionage done, but first the government will have to give an affidavit in the court.

Cong is a party full of spies: Shivraj
Chief Minister Shivraj Singh Chouhan attacked the Congress in the alleged espionage case through Pegasus Project. He called the matter a disgusting conspiracy of the opposition. He said that there is an international conspiracy to defame Indian democracy. Not only this, Shivraj said- History is witness that Congress is a party full of spies. He alleged that 9,000 phone calls were tapped under the then UPA government.
Shivraj said that the political power of Congress has become zero. What will we (BJP) do by spying on him? Some foreign powers and Congress are unable to digest the popularity of Prime Minister Narendra Modi. The Pegasus Espionage Case is a story built on lies.