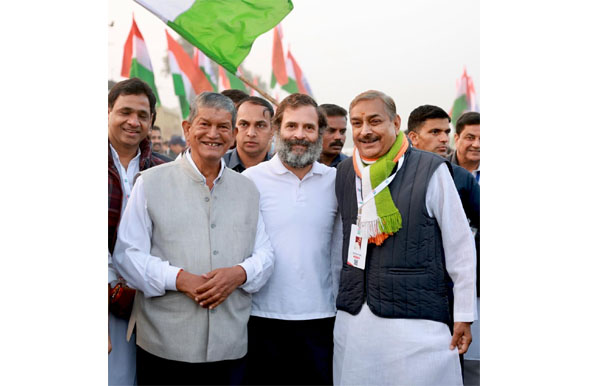 No relief given despite fall in crude oil prices, says Gandhi
Bhopal: Former Congress President Rahul Gandhi has said that the public is worried about inflation, but Prime Minister Narendra Modi is not taking steps to provide relief to the people of the country despite the reduction in oil prices in the world.
The Congress leader said that the price of crude oil has come down by a quarter in the international market during the last six months and the whole world is feeling relieved due to the reduction in the price of crude oil, but the Modi government has not given any benefit to the country. Not given to the public. Despite the fall in the price of crude oil, the government has not reduced the price of oil by even a single rupee.
Mr Gandhi tweeted “In the last six months, crude oil has become cheaper by more than 25 per cent. The prices of petrol and diesel in the country can be reduced by more than Rs 10, but the government has not reduced even a single rupee. The people of India are suffering from inflation, the Prime Minister is engrossed in his recovery.

Swara joins Yatra
After a day's rest, Rahul Gandhi's 'Bharat Jodo Yatra' today began its ninth day in Madhya Pradesh from Ujjain district to its next destination.
Gandhi's journey started from the local RD Medical College at about six in the morning. The next stop of the yatra was Nazarpur village, where the yatra reached around 10 am.
Film actress Swara Bhaskar joined the Bharat Jodo Yatra that started from Ujjain this morning and walked about six kilometers with Mr. Gandhi.
Regarding today's visit, former Union Minister Arun Yadav tweeted that Naveen Kothari, grandson of freedom fighter from Vidisha district, is walking step by step in the journey to give the painting made with his blood to Shri Gandhi.
Shri Gandhi's yatra will enter Rajasthan on coming December 4 via Agar-Malwa district of the state.

SC community will vote in favour of Cong: Ahirwar
State President of MP Congress Scheduled Caste Department Pradeep Ahirwar met Rahul Gandhi during the Bharat Jodo Yatra.
Ahirwar apprised Rahul Gandhi about the activities of the MP Congress Scheduled Caste Department and the functioning of the organization during this meeting. He told Gandhi that the BJP government of the state is continuously doing atrocities and injustice on the Scheduled Castes.
Ahirwar assured Rahul Gandhi that the scheduled caste society will play an important role in the upcoming assembly elections to be held in 2023 and the SC voters will support the Congress party to form the Congress government in Madhya Pradesh under the leadership of Kamal Nath. will vote in large numbers.

Mishra questions Swara’s presence
Madhya Pradesh Home Minister Dr. Narottam Mishra today raised questions on the participation of film actress Swara Bhaskar in Congress leader Rahul Gandhi's 'Bharat Jodo Yatra' in Ujjain district of the state.
Releasing the statement, Dr. Mishra said that Swara Bhaskar was giving power to actress Richa Chadha's statement on the Indian Army. Swara has also given statements in support of Pakistan before this.
Dr. Mishra said that along with Kanhaiya Kumar, Swara Bhaskar, people who say Pakistan Zindabad are also on the journey of Mr. Gandhi. He said in a questioning tone that this yatra is not seen to be supporting 'Break India' instead of 'Join India'.
Sushri Bhaskar had joined the yatra which started from Ujjain district today. She walked with Mr. Gandhi for about six kilometers.