People fed up with NDA in Bihar, Grand Alliance all set to form govt : Rahul Gandhi 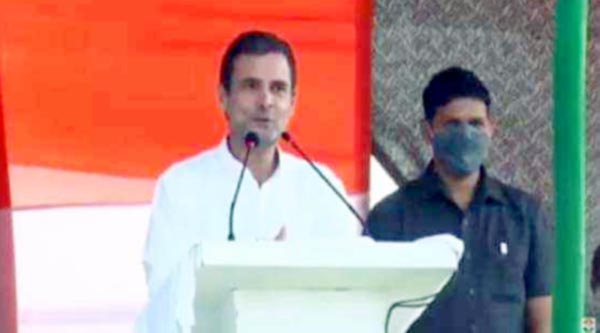 Madhepura/ Araria, Nov 04 (UNI) Former Congress president Rahul Gandhi on Wednesday made a scathing attack on Nitish-led NDA government, saying it did nothing for the welfare of labourers, farmers, working class and common man.

Mr Gandhi while addressing public meetings in Madhepura and Araria, seeking support for Grand Alliance candidates in the ongoing Bihar Assembly elections, said that people were fed up with Nitish-led NDA government and Grand Alliance was sure to form the next government in the state.He accused that the NDA regimes at the Centre and the state did not fulfill their post-poll promises.

Taking a jibe at BJP's election success in other states in India, the Congress leader said had it not been the effect of Modi Voting Machines (MVMs) in other parts of country, BJP and NDA governments wouldn't be formed.

People of Bihar had made up their mind to oust the NDA government and there would not be any effect of "MVMs" in Bihar and Grand alliance was all set to form the next government in the state.

Mr Gandhi was making an oblique reference to the alleged EVM tamperings in the states where Congress had lost elections.