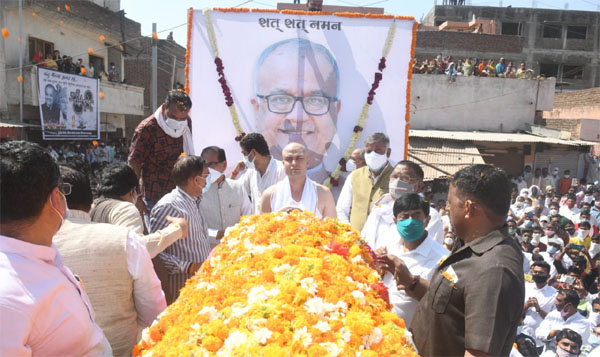 Late night the mortal remains of the MP were brought to his native village Shahpur in Burhanpur. Hundreds of BJP workers and their supporters gathered here on the information about his body being brought here. Late night, the entire city appeared on the road to pay homage to Nandkumar Singh Chauhan.

Earlier, his body was taken from Bhopal to Ashta, Satwas, Narmadnagar to Khandwa. At 2:30 am, his body was taken to the BJP office in Indira Chowk from the main market of Khandwa. A large number of people were present, including Khandwa MLA Devendra Verma, former Mayor Subhash Kothari. A large number of people participated in the last journey in Shahpur.

BJP MP from Khandwa Nandkumar Singh Chauhan died on Tuesday morning. He breathed his last at Medanta Hospital in Gurugram. His body reached Bhopal late in the evening. Meanwhile, Chief Minister Shivraj Singh Chouhan and State President VD Sharma lent shoulder to the body of Nandkumar Singh Chauhan at the state hangar. Several BJP leaders including Minister Vishwas Sarang, Tulsi Silavat, MLA Ajay Vishnoi were also present on the occasion. The body was brought from the state hangar to the BJP state office for paying homage.